I've got my running shoes on 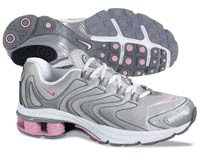 Sitting around at work Friday when it was like 2 degrees outside, some co-workers and I decided on a plan.

It involves a pair of running shoes, 10 weeks and a goal of a 5K in April.
There's a half marathon and 5K race here in the City on the Water in April. One co-worker has decided to run the half marathon while another co-worker and I decided on the 5K route.
After making that decision, I spent a chunk of time Friday night looking for a good training program to follow. I know I've logged 2 mile runs on a treadmill to nowhere before, but I figured having a training "program" to follow will make me go to the YMCA on a regular basis. And that's part of my thinking in signing up for this race. I need to get back into the YMCA habit that I somehow lost somewhere between the 'burg and the City on the Water.
Day One of training was supposed to start today. On my "program" I was given the option between rest or a run/walk. I had good intentions when I woke up this morning. Even though it was -16 degrees below zero. I was still going to make it to that treadmill tonight.
Then I went outside.
And I froze.
Because, hello, it was minus 16 outside. And windy. Which made it feel more like minus 35. And just in case I need to remind you, that's freaking cold!
So there went my plans for a trip on the treadmill. But I don't feel too bad because, hello, I was given the option to either rest or run/walk. And I chose to rest.
Because negative 16 is just too cold to run.
But they say we might actually break zero tomorrow and have a temperature around 5 degrees. While not much warmer, it is in the positive numbers. So I'll be heading to that treadmill because my "program" tells me I'm supposed to run 1.5 miles.
Posted by Badgergirl at 9:04 PM

Training is for fools. You'll be way faster than me no matter what.

This fool needs to get her butt back to the YMCA on a more consistent basis. Hence, the "program." :)