The Badgers, they were right there in front of me! 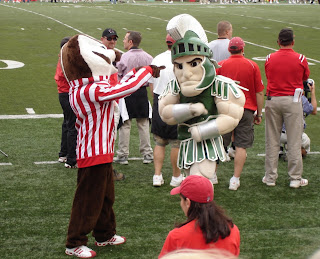 I was in heaven yesterday.

Although it wasn't my first trip back to Madison, it was the first time since I graduated that I stepped foot inside Camp Randall stadium on a football Saturday. And it was fabulous.

While I was in college, if there was a home game at Camp Randall, you could find me somewhere inside the stadium. Usually camped out in sections N, O or P - home to the rowdy students. But once graduation came, I no longer had my student voucher to get me inside the gate. Unable to find tickets, I was left watching my Badgers on TV.

But that all changed yesterday. When for the first time since late 2001, I stepped inside Camp Randall to watch a game.

My seats weren't in by the students for yesterday's showdown with Michigan State, but they were inside Camp Randall. And really? That's all that mattered to me.

The Wisconsin band takes the field before the game.

The seats were good. Three rows from the field, close enough so you could see the players' faces and that hit on Kyle Jefferson late in the first half? I thought someone was bashing two helmets against each other right next to my ear. 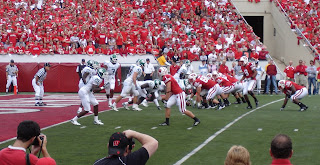 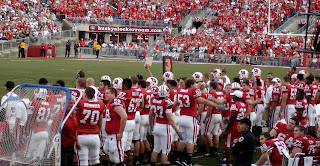 The UW bench asks the crowd to get loud late in the fourth quarter.

My only complaint? I missed the antics of the students. The folks that surrounded me in Section H? They were more concerned about where the guy in front of me lived and they just stared in awe at the beginning of the fourth quarter, when House of Pain blared throughout the stadium and the students took part in the traditional "Jump Around." They watched. Me? I jumped. And I got a few stares. But it was fun.

And the Badgers? Even though the game was a lot closer than I would have liked, going down to the wire with Michigan State's final possession, the Badgers pulled out the 37-34 win.

Afterwards Mom and I stuck around for the Fifth Quarter. Once again, the folks around us left as soon as the clock hit zero. But we stayed, enjoyed the band and had a good time. At one point, I jumped a fence in an attempt to get a picture with Bucky Badger, but he must have seen me coming, because his handler - yes, a college mascot has a handler, multiple ones in fact - lead him away.

It was a good day. I got to be back in Madison on game day, inside the confines of Camp Randall Stadium. And my Badgers won, which is always a good thing. They only downside, I realized how much I miss living in the city I called home for four of the best years of my life. And someday, I think I might want to go back.

But for now, I just have the memories and an upcoming trip to look forward to. But that trip? It'll feature Badgers on skates, not on turf. But it will be just as sweet as Saturday's trip to Camp Randall.
Posted by Badgergirl at 9:26 PM

I dated a guy who was Bucky Badger his senior year at Madison. True story.

I think my favorite Bucky is the hockey version, because really, can you imagine how hard it is to skate with that head and not fall flat on your face?