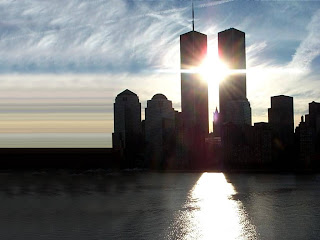 It's been six years, yet it feels like it was just yesterday.

I had just started my senior year at the University of Wisconsin. Class had been in session maybe a week. September 11, 2001, started like any other Tuesday. I had a 9 a.m. class, "Creative Non-Fiction" with Professor Deborah Blum, so I got out of bed around 7 a.m. and took a shower. Once I finished up in the bathroom, I returned to my room to finish getting ready. I casually turned on the TV to see what the weather was supposed to be like.
But my channel flipping never got me to The Weather Channel. I never found out what it was supposed to be like, because I stopped dead at scenes of chaos from New York. A gaping black, burning hole in one of the World Trade Towers.
Then from the side of the screen, a second plane, came crashing into the second tower.
I closed my eyes, unable to fathom what I was seeing. I stood there, still semi-dripping, in my towel, and somehow I knew what I was watching was big. This wasn't just an accident.

But words from the news anchor caught my attention.
"United airline flights"
My eyes snapped back to the television. They were telling me that two of the jets that had crashed into the tower were United flights. As in, airplanes flown by pilots from the airline my brother worked for.
Without thinking, I grabbed my cellphone and called my mom.
"Where's Cory today?"
"At home. Why?"
Poor mom, she didn't realize our country was under attack. I filed her in on what I knew and feeling a little better knowing my brother was safe in Wisconsin, I told her I loved her and promised to call later.
I throw on some clothes and opened the door, meeting the gazes of one of my roommates, but noticing the door at the opposite end of the hall remained closed. Eventually it opened, and Lisa, my roommate who called New York City her home, emerged. I'll never forget the blank stare in her face as she closed her door and left our apartment for class.
Moments later, the first tower fell. 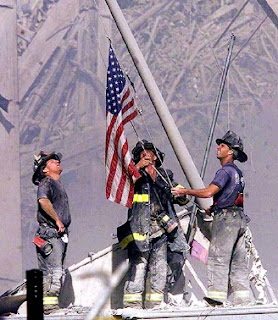 I had an internal battle in my mind. Do I go to class or skip it? In the end, I knew this was something I had to witness in the company of others and since I was heading to the journalism building, I was pretty sure my professor wasn't going to try to teach us, rather, she was going to let us watch history in the making. The walk down Langdon Street was eerie, the normal hustle and bustle missing. Instead, there were a few random kids, walking alone, usually with a cellphone to their ear.
Once I got to class, my professor herded us into the teaching assistant's lounge, where we watched the news coverage, not as undergrads, professors or graduate students. But as Americans. And when the second tower came crumbling down, I heard a former professor gasp behind me, "That's not good."
I abandoned the rest of my classes for the day, instead choosing to spend the day in front of the TV with my then-boyfriend. As I watched the images being replayed, I still couldn't truly believe it was happening.

A day or two later, I was among the thousands who gathered on the lawns in front of Memorial Library. As the candles flickered and we sang songs of peace and patriotism, I looked around at the faces that surrounded me. We were no longer Wisconsin kids or kids who hailed from the Chicago suburbs or kids from the East Coast. We were Americans, grieving for our country.
And today, on this sixth anniversary of that horrific attack, I still grieve, for the 2,974 victims that were killed by the Sept. 11 attacks: 2,750 connected to the World Trade Center, 40 in a Pennsylvania field and 184 at the Pentagon. Those numbers do not include the 19 hijackers.
I will never forget you.
Posted by Badgergirl at 8:13 PM