I finished my first half marathon on Sunday, the U.S. Cellular Half Marathon. And while I wasn't the fastest, I wasn't dead last. The important thing, for me, is that I accomplished the goal I set out for myself back in June, to finish.

Krista (who was also running the race) and I picked up our race bibs and goodie bags Saturday and scarfed down some spaghetti. Then we crashed. I even fell asleep shortly before the fourth quarter of the Badger game, missing the end of the game and not knowing if Wisconsin won.

We got up at 6 a.m. Sunday, took a quick shower and had half of a bagel before taking off for the starting line. My mom came along with us, acting as official chauffeur and photographer for the day. 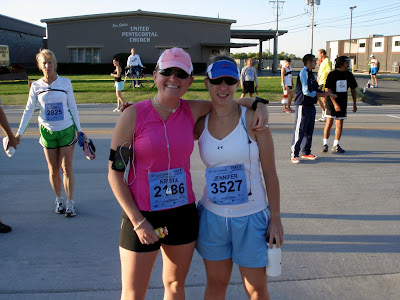 Standing in the massive crowd of people at the starting line, I couldn't believe what I was about to do. Yes, I had spent the last four months or so training, but part of me still didn't feel ready for what I was about to tackle. At one point, I remember looking over at Krista and saying, dammit, if I’d never met you, I never would’ve gotten this crazy idea in my head. She just smiled and chuckled.

And then the gun went off. And I had to start running.

The first few miles were fine. Somewhere around Mile 1.5, I saw a woman, decked out in her Badger T-shirt, standing in her driveway with her cup of steaming coffee watching the runners go by. I pulled one of my earphones out and asked her, "Did they win?" She looked momentarily confused, but smiled when she realized what I was asking and said, "Yup." That made my day.

I kept running. Over the highway overpass at Mile 2. Through some neighborhoods and out onto the street that I would find myself running on for the next 4 miles, which would seem like forever.

I almost got hit by a car around Mile 6.5 while attempting to cross an intersection. But I blame that on a pair of inept police officers. One who was waving me through the intersection while the other one was telling the cars it was OK for them to go.

I kept running. At Mile 7 they had a clock set up and it said I was 1 hour, 22 minutes into the race. Not too bad, that was about where I figured I would be time wise at this point. And I still felt OK, even though when I passed my mom at Mile 8 I told her I was dying. But I wasn't. 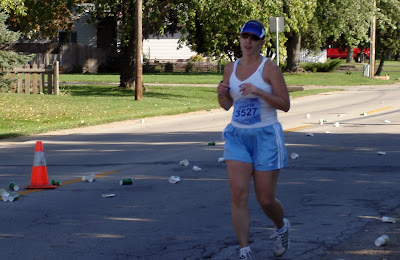 Things were going fine, although for a while I didn't think I was ever going to leave the City of Menasha. I tell ya, it might not be a big city, but it took FOREVER to run through it! The clock I passed around Mile 10, shortly before I left Menasha told me I was 2 hours, 6 minutes into the race. And I was still feeling OK.

And that's when I started to struggle. It didn't help that there was this huge bridge in the middle of Mile 11 or that it was really windy at that point. And I was running uphill INTO the wind while trying to cross that bridge.

I found myself having to take a longer walk break. My legs? They were starting to feel weak. And I still had at least a mile to go. I passed the marker for Mile 12 and I started running, OK, more like a shuffle, but in my mind I was running. I ran passed the boats and I could see where the finish line was in the park. But I still had to run around the park.

I took another walk break with the intention of being able to run the last straightaway to the the finish line.

All of a sudden I saw Krista, who had come to cheer me on to the end. Even though she'd already run 13.1 miles that day, she came to find me and run the last bit with me. And I was grateful for that. Because without her help, during the race and the months leading up to it, I don't know if I would have been able to finish this journey and accomplish the goal I set for myself.

I had just enough left in my for a "sprint" across the finish line. Not a very strong sprint, but a sprint nonetheless. 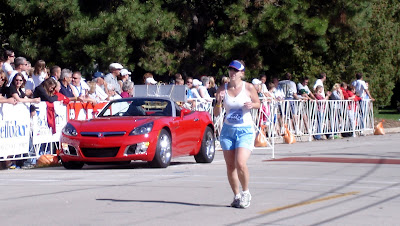 Afterwards, Mom and Krista asked me if I would do it again. At that point, my legs still feeling weary, I said I wasn't sure. But now, about 36 hours later, I can say yes, I'll definitely do another half marathon, because as much as I complained about the training and the long runs, the feeling I got when I crossed the finish line was so worth all the sweat and miles. 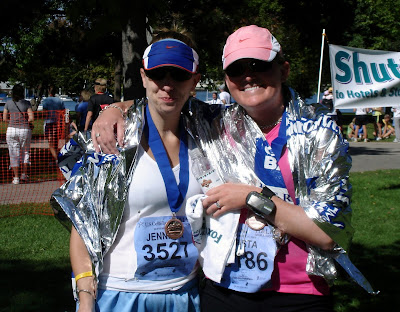 And to Krista, congrats on your race and thanks for putting this crazy idea in my head.
Posted by Badgergirl at 8:10 PM

Congratulations on finishing your first half marathon! How long will you wait before you sign up for another one?

Aw, I love it! Congratulations, again - you are fabulous.

I'm SO happy you'll do it again.

I hope to see you on the team for Octopolluza!!!!

You girls look hot even after all that running. Don't know how you do it.

Congratulations!! I bet you will run another.