Yeah, he was fast

I headed out to Wisconsin International Raceway Thursday night, where my cousin races a limited late model car.

In past years, I've made it out to watch him quite a few times, even though I was living in the 'burg and the races were on Thursday nights. But now that live a half hour away, I've only gotten to the track one other time.

And I admit, I enjoy watching the races. Just like you might find me channel surfing and keeping tabs on the NASCAR race on Sundays.

I never used to like auto racing. In fact, I found it a bit pointless. I mean seriously, they were driving in circles. But you can blame my new found enjoyment of it on the year I lived in Indiana. That year, I was the designer who put together the Monday sports section. And I had to include every bit of racing news possible, otherwise I'd have some very angry rednecks calling me and complaining. During the year I was there, I grew to enjoy keeping tabs on the sport and I also got the opportunity to head down to Indianapolis Motor Speedway and talk to NASCAR drivers Ricky Rudd, Bobby Labonte and Tony Raines for our Brickyard preview tab. I so wanted the Matt Kenseth interview, but unfortunately he decided to skip out on testing at IMS that year.

Anyway, back to Thursday night at WIR. 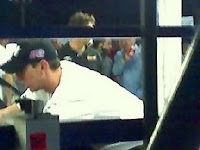 My cousin got involved in a wreck about 2/3 of the way through his feature race and wasn't able to finish since he cracked his fuel tank.

But there was also a buzz of excitement in the air since NASCAR star Kyle Busch was making an appearance at the track. Between races in Slinger and Madison, Busch decided to make a pit stop at WIR on Thursday and race in the 50-lap late model feature.

Since he was the fast qualifier, nearly setting a track record, Busch started the feature somewhere in the middle of the pack, about 15th place. And to watch him work his way through traffic, at speeds of 120 miles per hour, yeah, that was pretty amazing. While most drivers out at WIR try to pass one car at a time, Busch was going for two or three cars at a clip. By lap 21, he had worked himself up to second place and quickly took the lead on a restart following a big wreck. He went on to win the race and afterwards could be found in the pits, taking apart his own car during the inspection process.

Now, I'm not a big Kyle Busch fan, in fact when it comes to NASCAR drivers, I like Matt Kenseth. But I have to admit, Busch put on quite the show Thursday night. And I'm glad I was there to see it.
Posted by Badgergirl at 2:36 PM