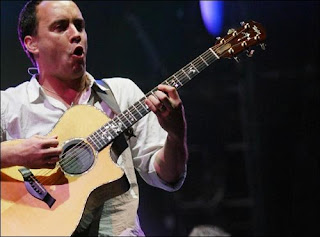 One of the things I enjoy the most about summer is concerts.

I love live music. It doesn't even matter if I actually like the band or musician that's playing. It's all about the atmosphere and groovin' to the tunes.
Each summer there are two musical adventures I make sure I hit up. The Dave Matthews Band at Alpine Valley and Summerfest in Milwaukee.
And today was a good day, as the Dave Matthews Band summer tour was announced.
For the past three years, I've been making the trek down to Alpine Valley with my friend Amanda from the 'burg. It's become a tradition. We pack up her car, pop a CD in her stereo (never DMB since that's who we'll be jamming away to in a few short hours) and hit the road, traveling on the back roads, avoiding the mess of the Interstate. Once we hit the parking lot, it's time for a few drinks and some food (crossing our fingers the little portable grill works...last year it didn't) before heading off for the show.
Even though I've seen the band play 9 times, each time is a totally different experience. It doesn't matter to me that the same songs are played, it's always different and so unlike what I hear on the studio recordings.
Amanda and I have both been anxiously awaiting the announcement of the summer tour schedule. It's starting later than usual this year, but DMB's rolling into Alpine Aug. 25 and 26 and assuming I win the battle with Ticketmaster, I know where I'll be one of those days.
Posted by Badgergirl at 6:52 PM