Five days of nothing

Take a couple of days of vacation, add in a weekend and toss in an extra day off to account for an upcoming Saturday shift this weekend and what did I have? Five days to do whatever I wanted. And what did I do?

Well, nothing too, too exciting. But it was an enjoyable five days to myself.

Thursday there was sleeping late, lounging around my apartment and then dinner with a friend at O'Charley's. I thought about hitting the YMCA, but decided against it.

Friday I did some errands during the day and then hung out with a bunch of 6- and 7-year-olds at a Halloween party at The Rugrats' house. All of the kids had a good time, even The Hellion (my youngest nephew), who demanded that all the "scary men" be taken down. He's only 2, I guess he doesn't quite get the whole scary Halloween concept yet. 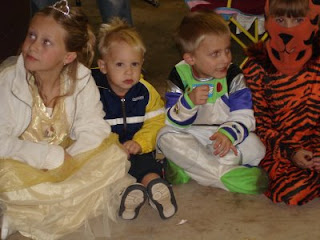 I listened to the Badgers suck it up on Saturday. Seriously. What happened to this team? I can't remember the last time they started 0-4 in the Big Ten. At this point, even that "gimmie" game against Cal Poly on Nov. 22 doesn't look like so much of a "gimmie." More like a "must win" in order to get to a bowl game. Maybe things will turn around this weekend when Illinois comes to Camp Randall. A Badger can hope, can't she? 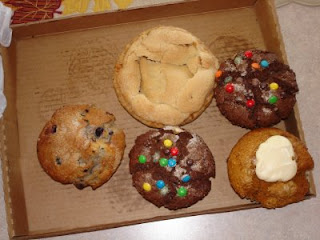 After the Badgers disappointed me, Mom and I went to the apple orchard, had a delicious caramel apple, looked at the crafts and then got some yummy treats. The two chocolate muffins? They're mine. Mom opted for the pumpkin and blueberry variety. And the mini-apple pie? We shared it.

Sunday was spent with the family, celebrating my youngest cousin's first birthday and then watching the Packers beat up on the Colts. Again, Aaron Rodgers looked good, bum shoulder and all. And Brett Favre? You're not doing yourself any favors pulling this kind of stuff.

And today? My final day of a super-extended vacation? I didn't do much. Did some errands. Paid some bills and putzed around. I thought about heading over to the YMCA, but decided not to. After all, it's vacation. The YMCA will be there when I head back to work.