The Badgers were a good excuse to watch some TV 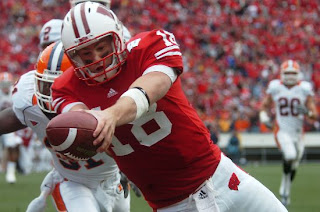 It was very fall-like today. Temperatures in the mid-50s, sunny and just a slight breeze. And since I was working a funky split shift today, with a large chunk of time off in the afternoon, I was toying with taking my bike out and sneaking in what could very well be my last ride of the year.

You know, because we have a forecast that features the mercury barely hitting 40, winds around 30 miles an hour and a chance of snow for the next few days. Not really ideal biking conditions.
So I went to work this morning and did what I had to do. I was sitting at my desk, writing my story and keeping my eye on Wisconsin's homecoming game against Illinois.
Then I was done. Ready to leave for the afternoon and I glanced at the football score.
Wisconsin 10, Illinois 10 at halftime.
Hmm. Not the blowouts that Wisconsin has been suffering the last two games. And from the glimpses I had seen, it was actually a pretty good game. And of course, since I'm cheap, I don't get ESPN2 at home. And I really didn't want to listen to it on the radio. Just wasn't in the radio mood today.
So I stopped and thought for a moment and it dawned on me.
The YMCA.
Remember? With its swanky new treadmills with TVs right in your face? It was a Saturday afternoon, there was bound to be a treadmill or two available for me to hop on and sneak in a run while watching the Badgers.
So I headed over and hopped on the treadmill to nowhere. Almost three miles and 30 minutes later, the game was heading into the fourth quarter (ironically, just as House of Pain's "Jump Around" came up on my iPod's play list) and the game was tied at 17.
It was time to bike then. Over the next half hour I logged 7 miles and watched the Badgers take a 27-17 lead with just under 3 minutes remaining. I could have walked away, satisfied that the Badgers would come away with their first Big Ten win of the season.
But 3 minutes is a lot of time. And Illinois had the ball. And I didn't want to take any chances of missing some big comeback by the Illini while I was downstairs in the locker room changing.
So I hopped back on the treadmill and walked while the game finished.
The Badgers won. And I got in a good workout. And that makes a happy Badgergirl.
Then it was back to work for me. But at least I could pass my time by keeping my eyes on the Badger hockey game against Minnesota tonight. Unfortunately, it's not going as well as this afternoon's football game.
Posted by Badgergirl at 8:58 PM