This being a cop thing is kind of fun

And this week? Well first we got to be negotiators. The folks who try to get the crazy, armed people to come out of a building without killing anyone or themselves. The crazy I had to deal with, "Dennis," demanded that I provide him with a helicopter, Snoop Dog and Ted Nugent. Hmm. Oh, and he wanted a cold pizza. "Dennis" eventually came out of the Walgreens, without killing any of his hostages. Although he did get a bit perturbed when I chuckled. Seriously, Snoop Dog? Flying a helicopter?
But after learning how to negotiate, it was time to play dress up. In SWAT gear. Which by the way, it very heavy. And quite bulky. But check out that gun! 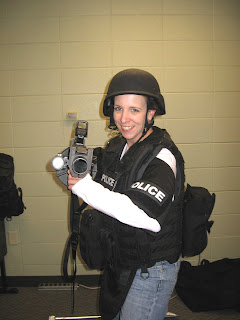 Posted by Badgergirl at 9:36 AM

First ghosts, now this...how come you get to do all the good stuff?

They let you carry around SWAT gear?
Do they know who they are dealing with?

You bet I got to hold that spiffy looking SWAT gun in my hands. Granted it was unloaded. And apparently the cops didn't mind, especially since they said that was one picture we should print in the paper.