Boyz II Men, well they were right. It's hard to say goodbye

Goodbyes are hard. It doesn't matter if you're the one leaving or if it's someone else who's about to start a new adventure.

This weekend, I found myself saying goodbye to a dear co-worker, Bethany.
She was one of the first people I met at the newspaper. In fact, I met her before I was even officially employed here in the City on the Water. During my interview, two reporters - one of them being Bethany - took me out to lunch. From the beginning, she was easy to talk to. And then I learned that we both lived in Anderson, Indiana, our stays missing each other by a matter of months.
I started my job and Bethany and I found ourselves working together on a big scandal involving a former public official. We got to know each other outside of work as well, discussing books, playing miniature golf and bonding over an occasional martini.
Now she's off to start a new adventure, back in Indiana. The Hoosiers will be lucky to have her, because I know she'll be missed by many here.
And last night we celebrated. A gathering that involved multiple drinks, a platter of fried food, some delicious pizza and good times with friends and co-workers.
Good luck in Indiana Bethany! We'll miss you. 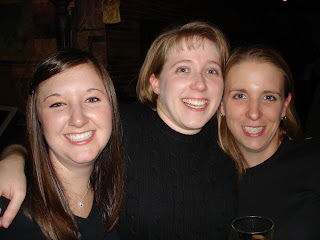 Posted by Badgergirl at 6:38 PM

Email ThisBlogThis!Share to TwitterShare to FacebookShare to Pinterest
Labels: Friends

Yes, apparently the appropriate attire for a going away shin-dig is black tops, jeans and black boots. Although one of us went for the flip flop option. :)

Aw, you girls are making me weepy! I adore this picture of you guys.