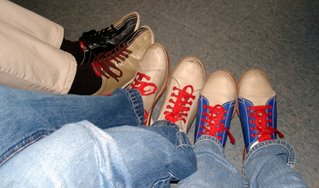 As evidenced by those spiffy shoes at right, I went bowling last night. Yes, for the first time since that 365-day stint in Indiana four years ago, I went to a bowling alley with the Parental Units, my cousin and his girlfriend in an attempt to knock down pins with a bowling ball.

My mom, the former bowling league member who doesn't know how to score spares and strikes, blew us all out of the water. My dad wasn't so spiffy. At one point, the bartender/Overseers of all things bo 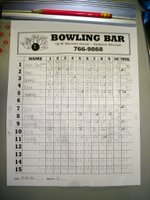 wling asked if Dad would like the bumper bowling option. That was right after my dad bowled two gutter balls in the same frame. At that point, Dad was struggling to break 20.
Me? I didn't do too bad if I do say so myself. Normally it's a good day if I break 70. But last night I bowled an 82 and 111. I had a couple of spares and would even have had a strike, expect I had bowled a gutter ball on the first frame, turning my would-be strike into a spare.
My cousin was all about trying to get that elusive turkey. And not the kind we'll be eating in a matter of days. No, the cousin was trying for the three strikes in a row turkey. And at one point he almost had it. With two strikes in a row, he only knocked down eight of the ten pins and left one standing with his second ball of the frame. It's probably a good thing he didn't get a turkey, because none of had the slightest idea how to score a turkey. So at the end of the night his score would have had a little asterisk by it and the explanation, "Cousin got a turkey. None of us know how to score it so we just made a number up."
Overall, it was an enjoyable night. I definitly would do the bowling thing again in the future. While the shoes aren't the prettiest and mine had a hole in the side leaving part of my foot hanging out, it was a good night.
Posted by Badgergirl at 2:27 PM