1. Furlough. Yup. That's what I've been doing this week. The week of forced, unpaid "vacation" is almost becoming a yearly tradition at my employer. And while I've completely disconnected from work (which is kind of nice), I've also kind of unplugged this week. No blogging. No reading blogs. I've checked in on Facebook and Twitter occasionally, but haven't done much updating myself. And honestly? It's been kind of nice. Although I do admit come Monday I'll be ready to dive back into the world of social media.

2. Even though I haven't been working, that doesn't mean I've been doing a ton of stuff. There's been reading. And relaxing. A little bit of bumming around town. Watched the Badgers beat Indiana. Kind of low-key. I like it. 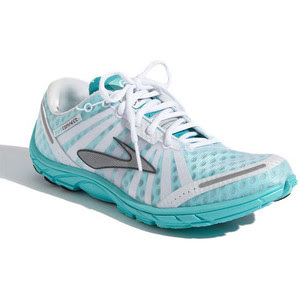 3. I have done some running. A Tuesday night group run with Krystal, the girl who paced me at the Oshkosh Half Marathon last year (and told me she'd be pacing me at the upcoming Seroogy's 15K). Wednesday was just a quick 3 miles on the treadmill and there was another 5 miles done on the treadmill Thursday night. During that run I did the first mile in my new pair of Brooks Pure Connects. I got one of those Active Schwaggles and ended up getting a good deal - only having to pay $55 for the shoes (normally $90). And I've been hearing so much about them that I was almost stalking the UPS man when he brought them on Thursday. I wasn't planning on doing all 5 miles of my run in them. And actually it was tough just doing a mile. They're definitely different than my Brooks Ghost 3s that I normally wearing. I could tell my foot was landing different, my stride was a bit different and oh boy, could I feel it in my calves. Like I said, definitely different. The jury's still out if they'll be added into the running shoe rotation and how far I'll run in them.

4. Oh, and I guess I should fess up that I did celebrate a birthday this week. I turned the big 3-2 on Tuesday.
Posted by Badgergirl at 1:47 PM

Happy birthday again!! I totally understand how you feel about unplugging. I try to unplug as much as possible on the weekends. Though, Steve calls my computer my security blanket. LOL Sometimes, I just can't help but check Facebook! :)

WooHoo for 32! The furlough and being unplugged sounds kind of good right now, I must admit.

Hope you had a great birthday!