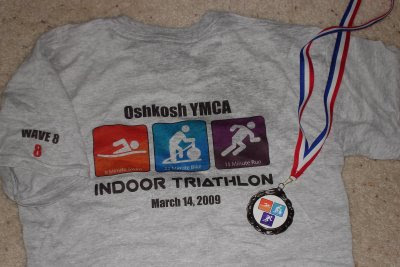 Add another piece of hardware to my collection.

Today was the second indoor triathlon at the YMCA here in town. Remember there was the one in January, the one I went into without doing any training whatsoever and managed to finish third in my age group (I know I reported finishing second, but apparently there was some mathematical errors that knocked me down a place).

Well the initial hope was to get on track at the gym and be able to do better at this triathlon. Well, I did better, but not because I put in hours of sweat at the gym. More like stayed far away from the gym the last three weeks or so.

But I did better. I finished second in my age group - and this time the race director promised me there would be no mathematical errors! So I came home with a shiny silver medal. That makes me a happy Badgergirl.

So how was the triathlon? Not too bad. It was the same set up as in January - an 8-minute swim followed by a 10-minute transition. Then 22-minutes on the bike, a 5-minute transition and a 15-minute run.

I got to the pool today and chose my lane. It happened to be right next to the lane where the hardcore girl from the January triathlon was swimming. I knew she was swimming there, I'm not sure why I chose that lane though. Maybe I was hoping swimming next to her would make me swim harder,or that her speed would rub off on me, especially since I haven't been in a pool in the last month or two.

The whistle blew and I started swimming. I wasn't fast. But I wasn't super slow. Yes, I alternated between freestyle and some backstroke, but I think I ended up doing less backstroke this time around than in January. When the final whistle blew, I had finished 13.5 laps, or 338 yards. Not amazing, but I think it was a little better than last time.

Out of the pool and into transition. I remember thinking I'd skip changing this time and just throw the shorts and T-shirt on over my swimsuit. For some reason I abandoned that plan and went for the full outfit change again. I ended up having enough time, but since my feet were still a little wet, I didn't think I'd ever get my socks on!

The bike went really well. This time I brought my iPod along, so I just plugged myself into my tunes and pedaled. Every so often I'd take one headphone out and listen to the chatter that was going on around me, but mostly I stayed plugged in and focused on my music. A little Kanye West, some Eminem and even a little bit of "Jump Around" by House of Pain got me through those 22 minutes. I pushed myself hard and it paid off because at the end of the bike, I had finished 9.9 miles, a full mile farther than I biked in January.

The transition to the run went smoothly, across the hall and up some stairs. We gathered at the starting line and I chose to hang out in the back of the pack. The whistle blew and the runners took off. Me? I just started running, not at a super fast pace. Just a comfortable pace. I didn't worry when the super fast runners lapped me. Just kept going. Every so often I would pass a runner and I felt good, especially since when it happened, it was usually near the starting line where all the lap counters were. And I'd have the runner in my sights, so I kicked it up a gear or two and ran a bit faster. I ended up running 15.75 laps and the guy tracking my laps told me somewhere between 11 and 12 laps was a mile, so I figure I probably ran about 1.3 or 1.4 miles, which is about what I was expecting.

When every thing was over I felt good with my performance today. Like I said, I've been slacking on the gym trips lately, so I wasn't sure what to expect today. But I felt good. Nothing seemed too difficult and there wasn't that point where I just wanted to stop and die. Actually when it was all over, I could have kept on running. Or biking. Or even swimming.

There were eight girls in my age group and when the race director announced that during the awards ceremony I honestly didn't think my name would be called. But the 11.3 miles I covered during the day was enough for second place, behind the hardcore girl, who logged 11.8 miles.

Bring on High Cliff. I'm not ready yet, but I'm ready to train for the task ahead.
Posted by Badgergirl at 9:22 PM

Congrats on placing 2nd in your age group! WAHOO!

Girl that is awesome!! congratulations on the 2nd place!