The Madness. I love it. 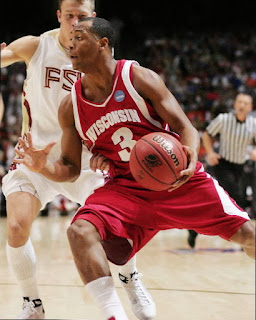 The Madness. I love it.

The opening weekend of the NCAA tournament is by far one of my most favorite weekends of the year. And if I had been smart, I would have scheduled that week-long unpaid vacation, also know as the furlough, for this week instead of the end of February. Because then? I could have sat in front of my TV and watched every. single. minute. of the first round.

I was working though. But I still managed to watch an awful lot of basketball. One of the perks of working at a newspaper I guess, we like to be informed. So the TV was on yesterday and the channel only changed in the afternoon to follow a local high school boys basketball team during their attempt at snatching a state title (they fell one game shy of the championship game).

After work I headed to the gym, planned on just a 45 minute session on the bike. But then I got pulled into the Minnesota/Texas game. And when the 45 minutes were up there was still 8 minutes to go in the half. And I could stop watching. So I kept pedaling. Another 15 minutes. One half of a basketball game, 60 minutes and 20.8 miles later I stopped and went home. To watch some more basketball.

More of the same today. Except I was the only person in the office for most of the day, so I got to do my work and enjoy the basketball in peace. Watched a chunk of the Marquette game during my lunch break (they were lucky to pull that one out) and after work headed home and prepared myself for the Badgers.

Yes. My Badgers. The team the NCAA tagged with a No. 12 seed. A first round date with No. 5
Florida State. So many people weren't giving Wisconsin a chance. But I did. And not just because I'm a Badgergirl. No. People weren't giving my boys enough credit. That 12 seed? I didn't agree.

I was watching the game tonight with my parents at this bar where we had gone for dinner. For most of the game, people weren't completely into the game. But me? I hardly spoke. Just watched the game. Cringed at that 12-point halftime deficit. Cheered when the boys in red pulled to even. Paced during the break between regulation and overtime and screamed, along with the rest of the bar, when Trevon Hughes hit the shot and the free throw with 2 seconds left to give Bucky the win.

Bring on Xavier on Sunday. Bucky and the boys are ready.

The bracket has held up fairly well so far. I went 25-7 during the first round. The West bracket is still completely intact and the Midwest regional is the only bracket that really suffered during the first round, where I only have four the eight teams remaining. And yes, I picked Western Kentucky to get by Illinois and Siena to be victorious over Ohio State.

But the Madness. I tell ya. I love it.
Photo courtesy of Wisconsin State Journal
Posted by Badgergirl at 11:48 PM

Email ThisBlogThis!Share to TwitterShare to FacebookShare to Pinterest
Labels: Badgers, The Madness

I love this time of year! :) We watched NDSU play Kansas during most of our lunch yesterday, and then I pulled my students asside to watch the second half... it's not every day that a team from ND plays in the NCAA tournament ... :)

I love this time of year too! When I worked at the paper last year, I used being informed as my excuse for watching the games online!