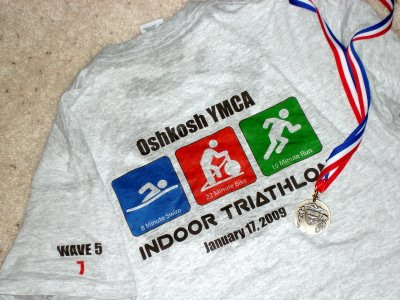 There's a new piece of hardware hanging in my apartment.

Today was the indoor triathlon at the YMCA that I signed up for on a whim a couple of weeks ago. The triathlon I was going to use to gauge my fitness level and use as a motivating tool to get my butt back in the pool. The one I was going into with very low expectations.

Those expectations didn't include coming home with a medal. But I did.

The set up was simple. An 8-minute swim, a 10-minute transition followed by a 22-minute bike. After another 5-minute transition there was 15-minute run to finish the day. There were seven other people in my wave - a set of parents with their two daughters and these three hardcore folks. And the hardcore folks? They scared me. Intimidated me. And they had their own paparazzi following them, snapping pictures throughout the day.

Since there were 8 of us and only 4 lanes in the pool, we had to share lanes. The whistle blew and everyone took off. I didn't go out fast. Just swam like I normally do. And after the fist length of the pool, I was bringing up the rear. But I didn't care. This was my second time in the pool since July. Low expectations, remember? I kept swimming, alternating between a freestyle and the backstroke. And I kept swimming, eventually passing the father, who I was sharing a lane with. When the 8 minutes were up, I had finished 13 lengths of the pool and some change. About 325 yards.

Then it was into the locker room for a quick change into my shorts, T-shirt and running shoes. Initially I was just going to throw my stuff on over my swimming suit, but at the last minute I opted for a full change. Looking back, I think I should have gone with the original plan. I made it to the bike on time though. A minute or two early actually.

The bike was set up on spin bikes. This is where the three hardcore folks started to really scare me, since I had to stare at them the entire 22-minutes we biked since they were directly across from me. And boy, did they bike. Their legs? It was almost like they were a blur going around in circles. Every so often they'd give each other updates as to how far they'd gone - I was usually 2 miles behind them. I pushed myself on the bike though. Covering 8.9 miles in the 22 minutes

Then it was on to the run - the part of the day I was most scared about given my recent struggles running and considering the fact my legs hadn't done a bike to run brick since, oh July. I didn't have much of a plan, just to go out and hopefully run the entire 15 minutes. I started out in the back of the pack, and was quickly passed by the three hardcore folks, who were just flying, after a lap. Oh well I thought. I kept running. And they kept passing me. But I was feeling good. My legs didn't feel dead and the run actually seemed to be coming easy. All of a sudden the whistle blew and the triathlon was done. I don't have an exact mileage on the run, but my calculations (which could be off considering no one seemed to know exactly how many laps equaled a mile) tell me about 1.5 miles. They told us a mile equaled 16 to 18 laps and I finished 26.25.

I was happy with how I did, but wasn't expecting to even place in my age group, considering two of the three hardcore folks looked like they were my age (so did the third one, but thankfully, he was a guy).

So imagine my surprise at the awards ceremony when they announce that I had taken second in my division - women ages 22 to 29. Other than a 4-team tennis invitational in high school where my doubles partner and I won our flight, I've never won an award for how well I've done in an athletic event. I've always been the girl who does these things just to finish or accomplish a personal goal, never to end up on the podium.

My first triathlon of 2009 is in the books and it looks like it might be a good year. The YMCA is having another indoor triathlon in March and I think I'm going to sign myself up, see if I can do any better.

Oh and the hardcore folks? They really were hardcore. They walked away with the overall award for the top female and male in terms of distance covered. Yeah, I think I had a right to be slightly intimidated.
Posted by Badgergirl at 7:07 PM

Nice job! How fun is that!

That is awesome! Congratulations.

I'm so envious that you've already gotten to do your first tri of the year. And you got hardware!! Way to go!!

Congrats on the first tri of the season. That seems like a cool way to get it started!