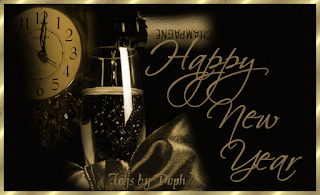 I hope everyone had a good New Year's. I spent mine celebrating with a good friend and a bunch of other folks in a bar downtown here in the City on the Water.

I'm ready to put 2008 behind me and move on. Because 2009? It's got to be better than last year. Don't get me wrong. 2008 wasn't an awful year, it was one of those in-between years. The whole Monster in my head? Although he technically appeared at the end of 2007, he was there during a good chunk of 2008 and when I did finally get him to leave, he left some baggage behind. So 2008? Not the greatest year. But not the best either.

But 2009? It's going to be good. I hope. And since 2009 is already over 14 hours old, I guess I better make some resolutions. Goals. Things to work towards. Some Monster related. Some not.

I give you, my resolutions for 2009:
That's it. Like I said, I know a lot of my resolutions have to due with the Monster. But he's played a big role in my life the last 14 months or so. And I'm at the point where I'm ready to be rid of him. I admit, I'm sure there will be times during the year where he makes a reappearance. And I guess he came come and visit. Briefly. There are no prolonged visits by the Monster allowed in 2009.
Posted by Badgergirl at 2:07 PM

Email ThisBlogThis!Share to TwitterShare to FacebookShare to Pinterest
Labels: Life, The Monster

Thanks so much for stopping by! You have some fantastic goals for 2009. Best of luck - I look forward to following along!