Bosses need to alert me before putting these headlines up 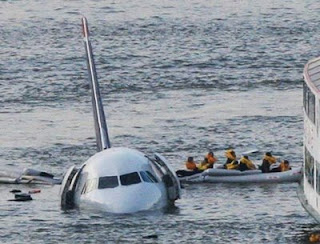 For a moment this afternoon, I felt like I was back on Sept. 11. When I saw a United jet crash into the World Trade Center, my thoughts went immediately to, "Where's my brother," since he was a pilot for that airline.

Same thing happened today. I was at work posting an update on our Web site. I went to refresh the page and a headline caught my eye, "US Airways plane crashes into Hudson River."

From that moment on I started going through the motions. My brother? He's a pilot. With US Airways. And he flies primarily on the East Coast.

This could be bad, I though. As I uttered that initial, "Uh oh," I was reaching for my cell phone. Calling my mom.

He had left earlier today to drive down to Milwaukee to catch a flight out East to go to work. She didn't think he was out there yet and was pretty sure the plane that was now floating in the Hudson River was not the same kind of jet he flies. Mom said she'd call me back when she knew more.

About 10 minutes later she calls back. She had talked to my brother. He was fine, sitting in an airport waiting for a flight. He actually hadn't heard about the crash - apparently when a plane crash occurs, all televisions in airports are turned off.

So I'm glad to know my brother's OK. And glad to hear the pilot of that US Airways flight had the skills he did. Because that landing? It's pretty amazing he was able to realize something was wrong. To be able to land an aircraft of that size IN A RIVER and all 150 passengers make it out of the plane safely. The man deserves major kudos. Because today's incident? Could have been much worse.
Posted by Badgergirl at 5:57 PM

Yeah, that would freak me right out too. Glad your brother is OK and while I haven't seen the footage of the plane actually going down, I agree that that pilot needs to be given an award.

Oh, and wouldn't turning off all the TVs in airports tip people off to something being wrong? Maybe they just switch them to Food Network or Discovery. :)

I saw so much news coverage on this while I was on the treadmill this afternoon. I instantly thought of 911 before reading a word of closed caption. That was a highly skilled pilot and everyone is lucky to get out of that situation alive. Amazing.

I too know a handful of pilots, one that primarily flies the East coast region. scary.

I thought of you and your brother when I saw the news about the crash. How amazing that everyone survived.