Turkeys. Santas. Who needs a calendar? 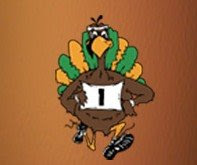 I think somebody's got their holidays a bit mixed up next week.

I'm running in a Santa Scamper on Tuesday. It's just a one-mile "fun run" type event before the annual Christmas parade in Appleton.

Then on Thursday, just two days later, I'm running in a Turkey Trot. Appropriately named since it does fall on Thanksgiving Day.

But the last time I checked, Thanksgiving came before Christmas. So shouldn't I be trotting after turkeys first and THEN scampering after Santa? Don't blame me if I get my holidays confused after this. Blame the race organizers. 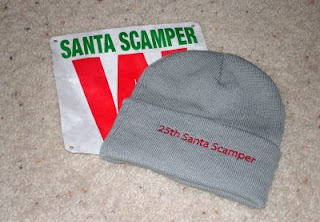 I dunno. What I do know is that I've already got the Santa Scamper hat, which might be useful since I have a feeling it might be a bit chilly next week. And after I get done trotting, I'll have a new long sleeved T-shift in my possession. AND a pumpkin pie, which I'll promptly take with me to my cousin's house for Thanksgiving. Because I don't like pumpkin. If it was a chocolate pie, now that would be a different story.
Posted by Badgergirl at 9:13 PM

LOL! That is some great schwag though...Hey try the pumpkin pie with whip cream. I hated it before then someone made me try it served that way. Darn them (pumping fist in air) now I like it. Like I needed to like more pies.

Alice and I are turkey trotting, too!

Only we'll be walking. And starting two to three minutes behind everyone else, with all the other stroller folks. Sigh.