I wish I had a hockey stick. I would have taken the penalty.

I went down to Madison with my friend Amanda last night for our annual hockey outing. I'm a Wisconsin grad and she went to school at Michigan Tech, so whenever the Huskies come to town, we head down to the Kohl Center for a night of checking, fighting, goal scoring and other hockey goodness.

Friday night the Badgers beat Michigan Tech 3-2 and were up 1-0 when the second period started. Then the Badgers got in the goal-scoring groove and jumped out to 2-0 lead by the end of the second period. Just 3 minutes into the third period, Bucky scores again and the students start with the "high school goalie" chants, which quickly turned into "pee wee goalie" chants. 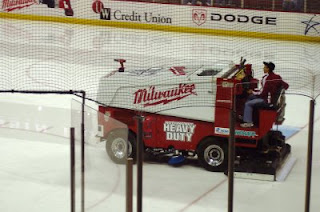 I admit, I'm a bit obsessed with Zambonis.
It was a good night. Five power play goals, a 34-save shutout by sophomore goalie Scott Gudmandson and the Badgers walked away with a 6-0 win and a weekend sweep of the Huskies.

Sounds like a good night. Right? Well it was. Until you factor in the cranky old man.

With 3 minutes left in the game, the student section starts up the "stand up old people" chant. And me? I'd rather stand as I watch a good college basketball, football or hockey game. But because I now fall in the "old people" category and my seats are no longer in the student section, I have to sit. Unless it's halftime during a football game or a goal is scored during a hockey game. Then I'm allowed to stand and cheer.

So last night, I followed the "old people" rules. I sat during the action and jumped out of my seat when the Badgers scored a goal, rejoicing with my fellow fans, calling the Michigan Tech goalie a sieve. 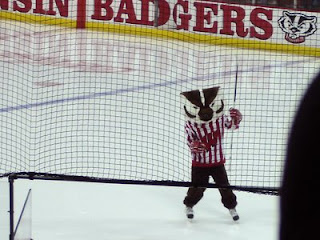 I should have sent Bucky after the cranky old man.
And with the 3 minutes to go, the students started calling for the old people to stand up. Because remember, Bucky was up by 6 goals. All that stood between them and a victory was 3 minutes of going through the motions on the ice.

We were supposed to be happy. Excited.

So we stood. The entire crowd at the Kohl Center, with the exception of Amanda and her son (because remember they were Tech fans) and the handful of Tech fans behind the bench, stood and cheered.

Maybe he thought I was hard of hearing or something. Because all of a sudden?

Not just a polite tap on the elbow. A full fledged smack on the shoulder.

I turned around and glared at him.

"Why? Everyone else is standing. We're winning. Be happy."

"You don't even have people standing in front of you. Sit down," he growled at me.

With a glare, I sat. And felt stupid. Because everyone else remained standing. Except me and the cranky old man. And then I fumed. Seriously, if he didn't want people standing in front of him, he had a few options. Either fork over more cash and get the swanky box seats, save some money and buy seats in the nose bleed section or better yet, stay home and watch the game on television.

So when there was 1 minute left on the clock, I stood. And he grumbled. And yelled at me again. But I stood my ground and continued to stand. And cheer on the Badgers to victory and celebrated with the rest of the Badger faithful.

And the cranky old man? He kept grumbling and got out of his seat with 10 seconds remaining and left the arena before the final horn even sounded.

Hitting another Badger fan, not staying for the end of the game, disobeying the students plea to "stand up old people" and not even bothering to stay and celebrate the victory with the time-honored tradition of "Varsity."

Some Badger fan he is.
Posted by Badgergirl at 7:26 PM