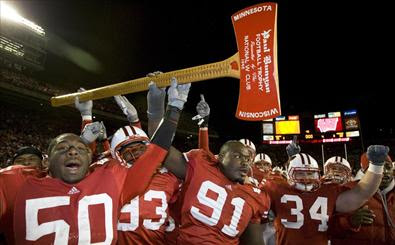 Photo from uwbadgers.com
I won't lie.

When I saw the halftime score of the Border Battle between the Badgers and Minnesota was 21-7 in favor of those dang Golden Gophers, I was worried. Wisconsin has gone from being mentioned in the same sentence with the words "national contender" to an 0-4 start in the Big Ten, losing close games against Michigan, Ohio State and Michigan State - all games they should have won. And let's not even talk about the blows outs against Iowa and Penn State.

So I was worried today at halftime.

But that must have been one hell of a halftime speech that Bret Bielema gave the boys in the locker room. Because the Badgers came back out fired up, erased a 14-point deficit, beat Minnesota and kept Paul Bunyan's Axe in Madison.

In process they've even become bowl eligible. It was a good day.

That being said, I cannot tell you how excited I am that basketball season tips off Sunday when the Badgers host Long Beach State. Let's just say I'll be flipping between the Badger game and the Packer game tomorrow. It'll be a good day.
Posted by Badgergirl at 9:46 PM

Nothing like a cool come back game especially when it's you team :-)