Thanks for the historic moments 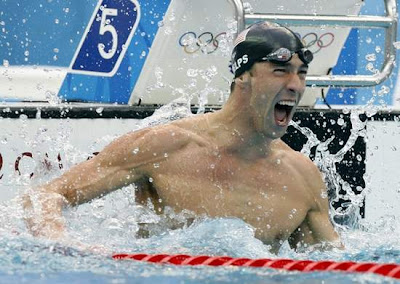 One historic week in the pool.

And I'm left amazed. And thankful I got the chance to watch Michael Phelps make history.

I was on the edge of my seat, waiting for the results of the 100 meter butterfly to flash across the screen. The race that was so close, even Michael's mother thought he finished second. But Phelps knew what to do. Took the extra half stroke and stretched to touch the wall.

One-hundredth of a second. Amazing.

And even though he was on an individual quest for eight gold medals, his team was still important to Phelps. I couldn't help but notice the first words out of his mouth to his teammates Saturday night after Jason Lezak touched the wall to give the US the 4x100 medley relay win were "Thank you."

No. Thank you Michael. For being an amazing swimmer who gave it his all during a week long journey to eight gold medals and an entry into the history books. We enjoyed it.
Posted by Badgergirl at 8:05 PM

Email ThisBlogThis!Share to TwitterShare to FacebookShare to Pinterest
Labels: The Olympics

I noticed the "Thank You" too. What an incredible athlete. Men's swimming is one of my fave Olympic sports, and Phelps was so incredible to watch.