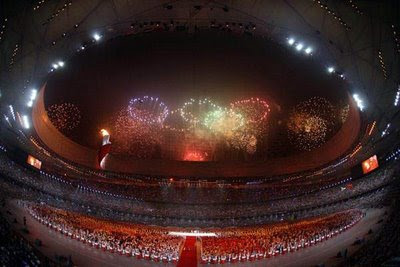 Every two years, for just over two weeks I find myself parked in front of the television, watching the world's greatest athletes compete on the biggest stage. 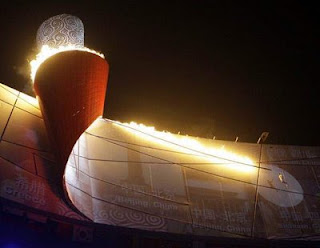 Either season, it's inspiring. Because it's not just about climbing atop the podium and having an official place a gold, silver or bronze medal around their neck. Yes, the results are important. But for these athletes, it's also about representing their country. You see it in the tears that are shed during the medal ceremonies and the winner's national anthem is played. And through the heartbreak of a dead last finish, you can see it in the athlete who was just as proud to come to the Games, compete and represent their home.

The Beijing 2008 Olympics kicked off today with the opening ceremonies. And for the next 16 days I'll be watching the athletes compete. I admit, swimming, diving and gymnastics are some of my favorite events to watch. But I'll also check in on the events like volleyball, track & field and rowing.

Even if there isn't an event on the schedule that I'm looking forward to seeing, I'll still probably watch the coverage. Because it only comes around every couple of years.

Let the Games begin.
Posted by Badgergirl at 8:07 PM

Email ThisBlogThis!Share to TwitterShare to FacebookShare to Pinterest
Labels: ramblings, The Olympics

I am excited too! :) Let the Games begin!