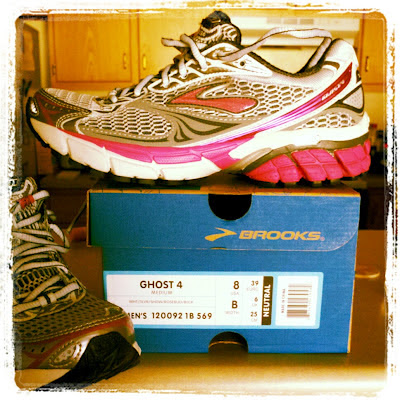 1. New shoes! I was adding up mileage on my trusty pair of Brooks Ghost 3s on Sunday after the half marathon when I realized I had logged 460 miles on those babies. Uh, oops. I normally replace my shoes somewhere in the 350 to 400 mile range. This might explain some of the IT band issues I've been having recently.

So after work on Tuesday I headed over to my local running store for a new pair of shoes. I was expecting to have to try a few different pairs on knowing that Brooks recently switched to the Ghost 4s and I wasn't sure if they'd feel the same as the 3s. But when I walked in the door, the store employee told me they were almost exactly the same. Only problem was they had a limited supply because Brooks is getting ready to unveil the Ghost 5s in the next month or two. Just my luck. They had one pair of Ghost 4s. In my size. Score! I tried them on, they felt wonderful and I was done. I had my new pair of shoes. The best part? Since a new model is coming out soon, they gave them to me for 20% off! Even better.

2. As soon as I got home I put those puppies on and took them for a run. The shoes felt wonderful. The run? Not so much. Heavy legs. Run felt hard. I was expecting this kind of given the fact that I had just run a half marathon two days earlier. But I pushed through and finished with 2.5 miles.

3. One week until I leave for Ohio! I'm looking forward to the vacation. Looking forward to hanging out with friends for a few days. And of course running the actual half marathon.
Posted by Badgergirl at 9:00 AM

Good luck in the 1/2! Show your sassy new shoes off!