Run Away to the Bay race report

Who knew that 55 miles could be so fun?

Saturday was Run Away to the Bay, the 55-mile relay from Oshkosh to Green Bay that I was running with four of the best running buddies a girl could ask for. It was also the first time I tackled a relay and left me wondering why it took me so long to try one. 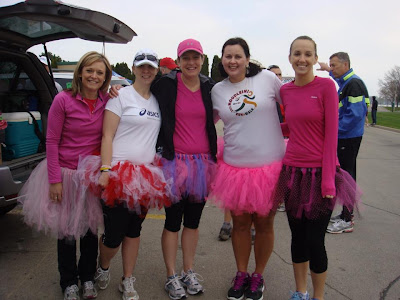 Getting ready to start Run Away to the Bay!

We met up bright and early at 6:30 a.m. Saturday to pile into Myriah's SUV and head down to Oshkosh. Upon pulling into the parking lot at Menominee Park we were greeted by runners. And lake flies - the little buggers are about 3 weeks early this year. Not cool. Anyway. We swatted away the bugs and set out getting ready for our 8 a.m. start time. Organizing the back of the SUV, decorating the windows with some not-quite-functioning window paint, donning out tutus.

Yes. We were the team that wore tutus. Heck, I think we were one of the only teams that dressed up other than teams that were wearing matching shirts. But those tutus? They'd come in handy.

Pretty soon it was go time. Peggy ran our first 5-mile leg. We watched her leave and then climbed in the SUV to meet her at the exchange point. Once we got there, it was a quick pit stop in the bathrooms at County Park and then it was time for me to run Leg #2, which was 4.7 miles.

Other than a turn out of the park and one other left turn, the route was a straight shot north on a county road that I've driven many times before. It's along the lake, so unfortunately I ran into a few swarms of lake flies, but other than a few rolling hills, it's pretty flat. I kept it fairly easy since I knew I had another 8 miles leg later in the day. 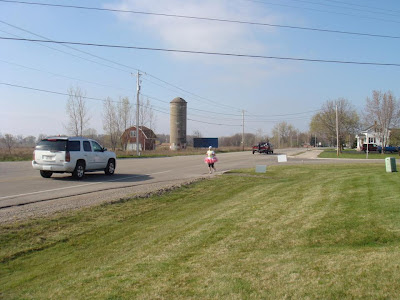 Somewhere near the halfway point of my first leg.

Since it was early in the relay, there weren't many teams around. So it was a bit of a lonely run - I saw one other runner - but it was nice. I was getting a bit warm in my capris and short sleeved shirt, but 48 minutes after I left County Park I was pulling into the exchange zone at the Vinland Still and Grill and meeting up with my teammates. 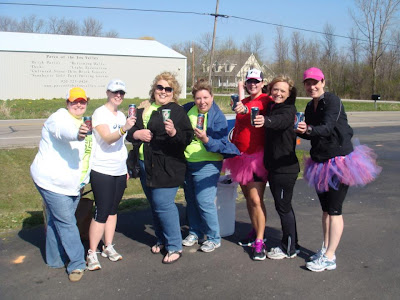 When the exchange point is at a bar, it shouldn't come as a surprise that there was beer tasting. Enjoying some with the volunteers!

We sent Krystal off on her leg and we were off. As we drove along we watched as Krystal picked off runners left and right - seriously that girl is speedy! We got to the exchange, Krystal came running in and Jasmine took off. 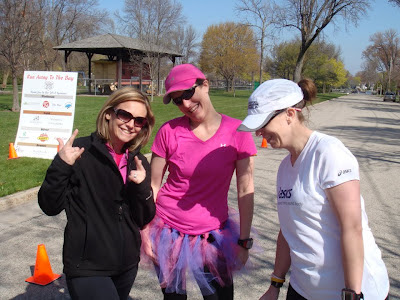 We saw Jasmine once early on in her leg. Then we stopped at a gas station for a quick wardrobe change. Apparently we weren't quick enough.

Because 20 minutes later we realized we lost Jasmine!

How we managed to lose our friend - who drove down from Superior for the relay - along a 4 mile route is beyond us. We drove ahead, dropped Peggy off at the exchange point and set out to try to find Jasmine. No luck. I called my mom, who was going to be at the exchange between legs 5 and 6. Told her if she saw Jasmine to not let her go anywhere. We drove back to the exchange and now Peggy was gone.

I jumped out of the SUV and went up to a volunteer.

"Have you seen two ladies wearing tutus? One in a pink one the other in a pink and purple one?"


"I saw the pink tutu, she took off running. I didn't see the other girl, but the bathrooms are locked."

We take off driving and find Peggy running about 2 miles up the road. But no Jasmine. But wait! Peggy's wearing the reflective vest we had to wear, which means Jasmine is alive. And somewhere. At the same time I get a phone call from my Mom. She's got Jasmine at the park with her. 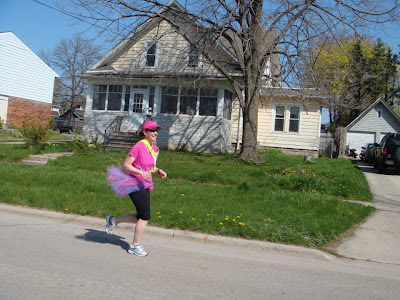 Before we managed to lose Jasmine in Menasha.

Yay! All five runners accounted for. Back to running.

All of this craziness meant that I had about 3 minutes to get ready to run my 8-mile leg. It was about 11:30 a.m. by this time and the temperatures were hovering in the low-70s. Not really typical for Wisconsin in April, but I wasn't going to complain.

The only downfall? There wasn't any shade on my 8-mile leg. At. All. Kind of brutal. 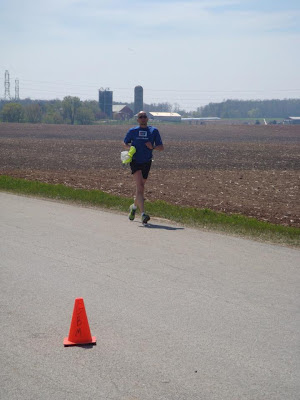 If it wasn't for Coach Jim, I wouldn't have met these girls.

I got to run with Coach Jim, from my Fleet Feet group (where I met all these girls), for a couple of miles during this leg. That was nice, took my mind off the run for a bit. But then he left and it was just me. I'm not going to lie. This leg didn't go so well. I was getting passed left and right. I felt like I was barely moving. I stopped a few times and walked a bit. Kept hoping I'd run into my team so I could add some ice to my handheld water bottle.

Instead I kept on moving forward. Tackling the rolling hills that dotted the route. And then, around Mile 5.5? I was facing a long, never-ending hill. I swear, the thing went on for over a half-mile. It just went up. And up. And up. And once I finally got to to the top? It was like I was dead. So I walked a bit more. I knew I just had to keep going though, so I ran. 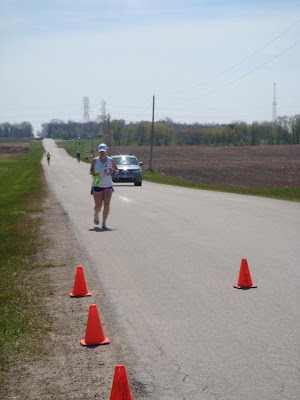 Finally making it to the end of a brutal hot, hilly 8 miles.

And eventually I got to the exchange where my teammates were waiting and I handed that reflective vest off to Myriah, who power-walked her 3-mile leg because knee surgery late last year has her on a strict no-running plan at the moment.

The final legs were on the Fox River Trail. Krystal picked off more runners on her leg (and her tutu decided it had had enough of running and was left somewhere on the trail - some birds are probably very happy), Jasmine hunted down a runner from a team we knew and Peggy picked up a third leg and ran it into the finish line for us. 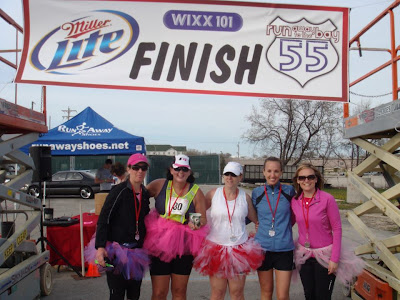 Finished! Now time to enjoy the after party.

And 9 hours and 16 minutes after we started, we finished the 55 miles at The Bar on Holmgren Way in Green Bay and picked up our medals. Then it was off to enjoy the after party, because I'm pretty sure we deserve it.

Guys, the relay was so fun. I couldn't have asked for a better group of ladies to run with. And even if we did lose Jasmine for about a half hour, I swear we rarely stopped laughing. Those tutus? They were great for spotting our runners and people on the route and other teams loved them. We became known as the Tutu Team. And they were a financially good investment for us, but that's a whole other blog post.

And there's a good chance my tutu-clad teammates and I will be back next year if our schedules permit!
Posted by Badgergirl at 9:00 AM

Sounds like a blast! I think it would be fun to do a shorter one like this.

That sounds like so much fun! Makes me even more excited for Ragnar!!!

I loved reading your recap. It sounds like you guys had such a great time. I can only imagine the laughing that took place. Love the tutus!

SO MUCH FUN! All week people have been asking me how the relay was and I honestly just start laughing. Where do I even begin?

We were not good teammates during your second leg. Sorry! We definitely should have found you a couple of times to check in and/or take over.

Thanks for thinking ahead to have your mom find me. Even if you did lose me, I'm definitely in again next year. Hopefully I'll see you all before then though. :)

That's OK about my second leg Jasmine. Makes up for the fact that WE LOST you!

I can only imagine the hysteria when you lost 2 of your runners!! I am tackling my first relay this weekend for the Oshkosh Half Marathon and thankfully I only have to watch for 1 other person.

I actually was out for my run on Sunday and ended up on part of the race course in Neenah....woops!

Aw, it sounds like so much fun!! I love the tutus! I wish I could do this someday!