What a difference a year makes.

Last year at the Oshkosh Half Marathon it was cold and the rain turned to sleet which turned to snow. And the wind. Ugh. Horrible weather conditions. And the actual task of running 13.1 miles? I finished, but it was hard. This year? Totally different. Sunny. Temps in the mid-40s at the starting line. Just a bit of a breeze for the final mile.

As for the race itself? Remember I was going into this with no expectations. Just going to get my long run in with 1,600 other runners. That being said, of course there was a part of me that wanted to do well, although I knew a PR would not be in the cards. 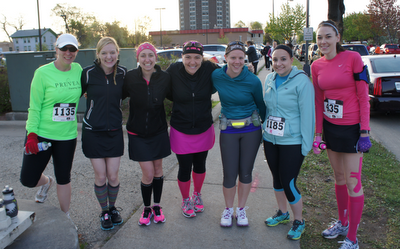 It was pretty low-key getting ready for the race. And of course I got stopped by a train on the way downtown. But I managed to park and walk over to a blogger meet up and made it JUST in time for the group photo. 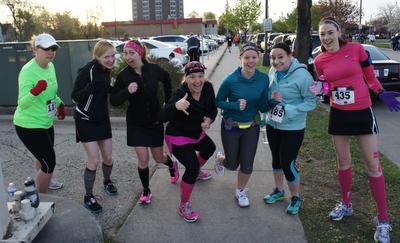 A few minutes before the start, I said my goodbyes and good lucks and went off to find a spot in the sea of people to kind of get in the zone. And before I knew the gun was sounding and we were off.

The half marathoners and 5K runners all started at the same time and shared the course for the first mile. Even though we were supposed to be on opposite sides of the street, I managed to find myself weaving amongst the strollers, walkers and little kids who would dart out from nowhere. I guess the good thing about this is that it kept my pace down.

I just ran. Kept the pace easy. I was ready to ditch my throw away gloves somewhere around Mile 2, but held on to them until I hit the water stop right before Mile 3 and the Wiouwash Trail. The first half of the race went smoothly. I stuck with my plan to run an easy pace and just walk the water stops. 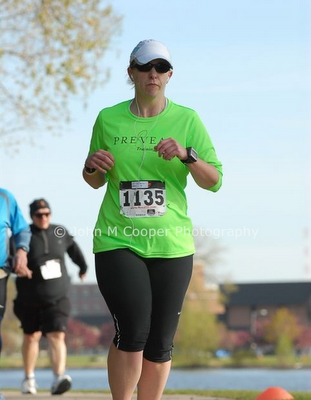 I took my first GU Chomp somewhere around Mile 7, which is right around the time when my IT band started to grumble a bit. Nothing major, but just a gentle reminder that it was still there. I know they always say don't try anything new on race day, but I used some KT Pro tape on my IT band for Sunday's run and honestly it worked pretty well. While it was still a bit cranky, it was much more manageable than it has been in the past.

So I kept running. Starting around Mile 9 I walked a bit farther through the water stops than I had been, but I was OK with that. Glancing at my Garmin, I was happy with the time I was putting up. It was feeling good. Well, as good as 13 miles can feel. 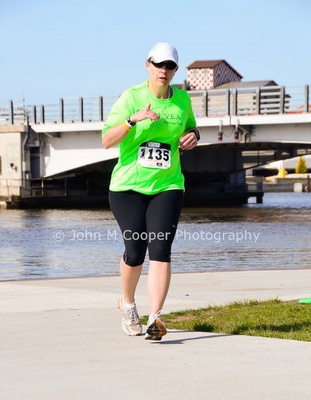 I made the turn onto South Main Street, passed the 12 mile marker and honestly, I was just ready to be done. I wanted to stop and walk so badly. But there was a voice in my head. My friend Krystal, who paced me during last year's race. And she was telling me the same thing she told me last year - ironically at just about the same place I was at - no, I couldn't stop and walk because the bridge, and the finish line, was just up ahead. 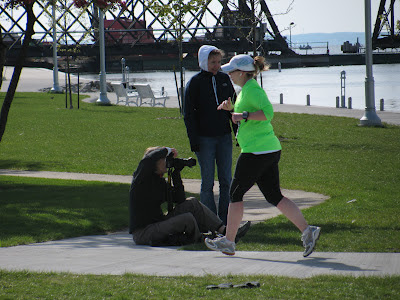 So I kept running, made the turn into the final straightaway and crossed the finish line.

Just about 20 seconds slower than last year, but I'm OK with that. It was a training run, one I'm pleased with. I was generous with the walk breaks at the water stops, I didn't push the pace. Just the kind of run I needed two weeks before Capital City Half and a month before Green Bay. 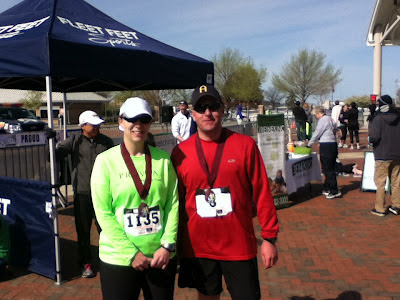 Afterwards I met up with @Joel_aa, a Twitter friend who was in town and running the race. We chatted over post-race food and drinks. Overall it was a good weekend of running and meeting up with runner friends.
Posted by Badgergirl at 9:00 AM

You got some good pictures from the race photographer! So glad we got to meet up again. Next time it will be RAGNAR! whoo!

Great job! You have awesome race photos too! Love the green on you.

I saw you on the course and yelled to you but you didn't hear me.

Would love to run together again sometime soon!

Sounds like you stuck to your plan and ran a smart race! Woot for Ragnar! Can't wait to meet you! :)

Great job! You got your miles in and got some hardware too. Glad you finally caught a break with the weather for this race.

I'm jealous of your race pictures...but the weather was definitely great this year. Good job on keeping your pace, when it comes to a race I just can't slow myself down anymore.

Congrats on the training race! You got some nice pictures taken too! The Oshkosh Half is a race that I neeeed to do one of these years, I went to UW Oshkosh for a semester, and lived there for 2 years. It'd be a neat way to revisit the city.

No kidding - your race photos are awesome! Great race!