Where do you even start with a recap for a race that was almost a month ago?

I don't know. And honestly, the details of the race are a bit fuzzy at this point. What I do remember about the Seroogy's Run 15K? It was cold. Oh so cold. We're talking maybe 7 degrees when the race started, but when you factor in the wind, it was closer to feeling like -10 degrees. Yes, below zero. So cold.

And when I went to pick up my packet there was a tiny part of me - ok, a big part of me - that wanted to switch over to the 5K distance when I saw all the other runners doing that. But then I remembered I had friends who would be out on the course suffering through 9.3 miserably chilly miles with me. 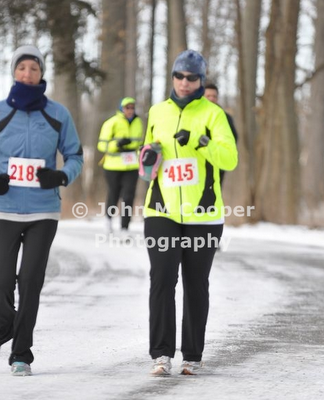 I ran with my friend Krystal - the one who paced me through the miserable conditions at the Oshkosh Half last spring - and I admit, this turned into more of a just get the 9.3 miles done kind of run rather than an actual race.

The course is a simple out and back, mostly through residential areas, but there was a pretty section through an abbey, which would have been prettier had I not been freezing cold and miserable. Yes, I was freezing and miserable within the first mile.

But I kept running. Keeping a somewhat decent pace. Actually I was feeling pretty good through the first six miles. Started to struggle a little bit after the turnaround point. Took a Gu Chomp and kept running.

Then I hit mile 7.5. And we turned right, which meant we were running straight into that bone-chilling cold wind - and uphill - for the final 2 miles. Brutal. So brutal there were moments I just wanted to find a pile of snow (because of all weekends it decided to snow the day before), curl up in a ball and cry. Or freeze to death. But Krystal wouldn't let me. So I kept running.

I was losing feeling in my legs at this point. And my face. And my IT band was getting a bit cranky (you would have thought the coldness would have numbed the annoying pain). And even though I had my hand-held water bottle with me, it wasn't very useful since it had frozen. Yup. I was left with a frozen bottle of Gatorade. So I kept running. 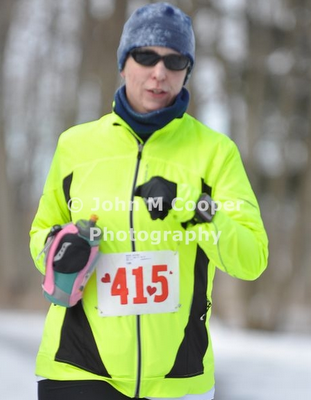 Eventually I made one last left hand turn and I was in sight of the finish line. Of course this was the crappiest footing on the entire 9.3 mile route. But whatever. I crossed the finish line. Frozen cold. But happy to be done. Krystal and I met up with Peggy - who rocked the freezing cold race - and we went and got our cheese and chocolate. Yes. The promise of chocolate was the only thing that kept going during those last 2 freezing cold miles. And the chocolate was good. Very good. 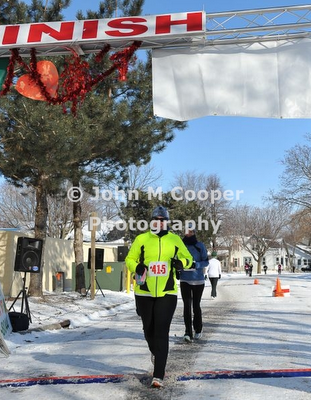 I ended up finishing in 1:50 and some seconds. Not what I was hoping for. But it was cold. And I could have stayed in bed or dropped down to the 5K distance. But I didn't.
Posted by Badgergirl at 8:00 PM

That does sound pretty awful. I can confidently say that I would not be able to do that race, and am incredibly impressed that you did! Congrats on getting through it and having the story to tell! I'm guessing one reason why it took a few weeks to write the recap is that you just finally thawed out! ;)