Running with the Raiders 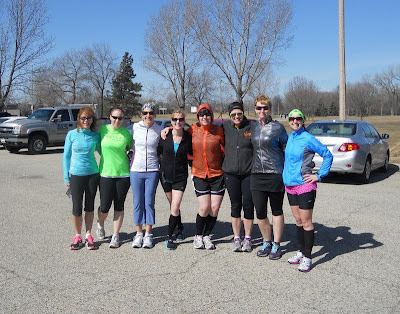 Last week I got a chance to meet up with a group of fabulous ladies last weekend.

Two-thirds of my Ragnar Chicago team, the Panty Raiders, made plans to meet up in Madison for a run (of course), some Ragnar talk and just a chance to get to know each other. It's a team that's made up of mostly female bloggers from the Midwest (Wisconsin, Illinois, Iowa and Michigan are represented) and while some of us knew people in real life, a lot of us just had connections with each other through the Interwebs. 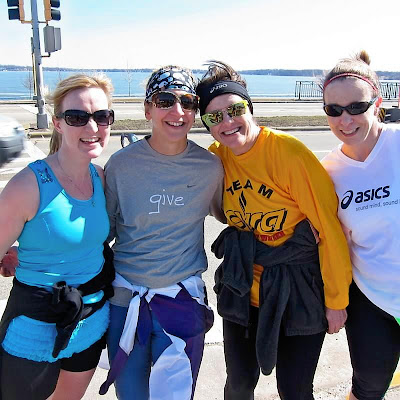 One windy mile left to run. What better way to wait out a stop light than snap a picture?

The plan was to meet up around noon at Olin Park in Madison for a run. The plan was start at the park, head north along Lake Monona and then up through campus until you hit Camp Randall where we turned around. Most of us did 6 miles, a few went further and some who are nursing injuries cut it short. And in true Wisconsin fashion, it couldn't be a nice tame day for running. Nope. Yes, it was perfect temperature-wise, with temps in the upper 50s/low 60s. But the wind. Oh the wind. It was steady  25-30 mph winds from the south. Which was great for part of the run, but oh so brutal during that last mile. I ran with Rachel, Falon and Lisa. 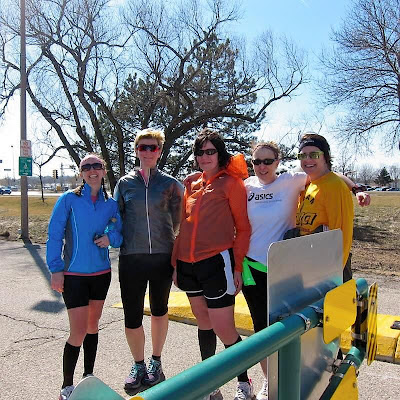 A windy run is done! Now time for some food and drink!

After the run we all met back up at the park and headed across the street to a sports bar to grab some food and watch the Badgers take on Michigan State. Lots of chatter. Lots of running talk. Some had to take off for prior commitments, but after we were sufficiently fueled, the rest of us headed over to a campus-area hotel to de-stink-ify ourselves and make ourselves presentable for a dinner and drinks on the Capitol square. 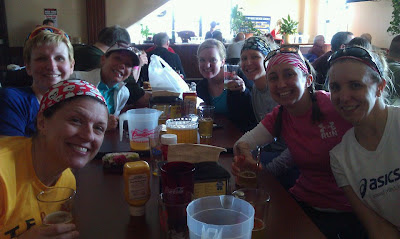 The Panty Raiders require food and beer to refuel after a windy run in Madison.

On oh so delicious dinner and more chatter later, I had to take off. But the remaining Panty Raiders were off to explore a Capitol Square tavern named Woof! I can only imagine the fun they had based on the photos I've seen. :)

I'm so excited to get a chance to run 197 miles from Madison to Chicago with these ladies. Can't wait for June and our Ragnar adventure!
Posted by Badgergirl at 8:23 PM

I'm so glad you came down for this Jen!! June will be AMAZING!

That's going to be a blast! Not just a wind blast either. What fun!

So sad I missed you guys!!! Looking forward to the race. You all look like just too much fun! :)