Dipping my toes back into the water

I've added something back into my workout schedule that I used to do, but haven't in over a year. 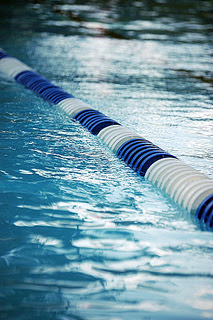 I used to swim at least once a week back when I was training for some triathlons, but last year I made a decision to really focus on running and half marathons. And when I was running five days a week, I kind of lost my way to the pool. As in, the last time I was in a pool was in January 2011, when I did an indoor tri on what just so happened to be my first run with my half marathon group (and also happened to be below zero that day).

So I haven't swam in over a year. But three weeks ago I was up at my parents' house and my mom and aunt were going to head over to the YMCA on a Sunday morning to water walk. They both recently joined t he Y and are really enjoying the ability to use the pool. So I went with.

And as I was floating up and down the walking lane with my noodle, I was glancing over at the people in the other lanes. Swimming. And I was jealous. Wishing I had my goggles and swim cap. Because darn it. I wanted to swim laps.

With broken goggles and no wearable swim cap, I made a quick shopping trip and picked up the necessities.

And two weeks ago I swam. And I did it again on Sunday. Both times I cranked out 925 yards. I admit. That first week? I remembered how hard swimming was. Seriously. I was lucky if I could crank out 50 yards and I'd be gasping for breath. But I took it slow, swam back and forth and got the laps in and in the end felt good. And it got easier this week.

So I'm happy I found my way back to the pool. And I'll be back this weekend. It's a nice change up from running and a little cross training is probably a good thing.
Posted by Badgergirl at 8:09 PM

I so need to do that. I know I will feel good if I do. And I only run 4 days a week so I should be able to fit it in.

Sweet! Swimming is fantastic cross-training for running. It really ramps up the aerobic capacity and should make your running faster and easier. Good call!

Just started getting in the pool this year myself and thinking of doing a small triatlon this summer to see if I like it!