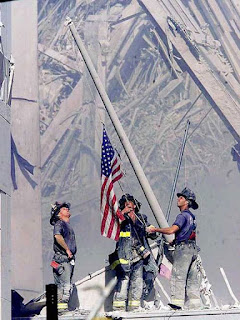 Seven years ago today a pair of jets crashed into the World Trade Center, changing our lives - and America - forever.

It's hard to believe it happened seven years ago and the memories are still so fresh in my mind. And try as I might, I can't say it any better than I did last year.

Our lives have regained some sense of normalcy, but the events of that day have never escaped my mind. And even though the footage of those planes hitting the towers was played over and over in the days and weeks following the attack and on the anniversaries, it still doesn't seem real and I still shudder when I see it.

And today, the seventh anniversary of that horrific attack, I still grieve. And I remember the 2,974 victims that were killed: 2,750 connected to the World Trade Center, 40 in a Pennsylvania field and 184 at the Pentagon. Those numbers do not include the 19 hijackers.

I will never forget you.
Posted by Badgergirl at 8:46 AM