It wasn't the Oregon Trail, but it was a trail I ventured out to the Wiouwash Trail this morning. For the first time this year.

Yes, the trail that I ran on twice a week last summer while I was preparing for the half marathon. And while I've been meaning to get out there this summer, I just haven't. The running thing isn't going so well at the moment. And that's what I'm used to doing out there.

So I've stayed away.

But I've wanted to go. And it's absolutely gorgeous outside today, so I decided I was going reacquaint myself with the trail.

I had the day off today, so I let myself sleep in a bit. Once I got out of bed, I had some breakfast, threw on a tank top and shorts, loaded up my bike and off I went.

The trail? It was wonderful. Riding down its crushed gravel brought back the memories I have of last summer. Those long runs when I thought I would never be done. Running along the trail, never knowing exactly how far I'd gone (although I noticed there are mile markers along the trail this year!). The days when it was hot, humid and miserable, yet I sill found myself running, albeit a bit slower. The bugs that sometimes attacked.

As I was riding today, I passed a few people. Mostly walkers. A couple of bikers. And two people on horses. I think my bike might have spooked one of the horses though since he started jumping around and I was afraid he was going to run me over. 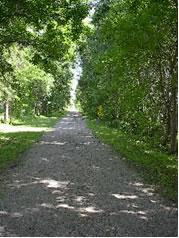 But mostly I had the trail to myself. Just me, my bike and my thoughts. And it felt good. Since I was on two wheels rather than running, I got to explore more of the trail than I have in the past. And it was nice. I rode past some cows, but mostly it lead me past fields and through wooded areas.

I wanted to go farther, but I had to turn around at the 10-mile mark. I had an appointment this afternoon and I needed to get home and have time to take a shower, especially since I ended up having a coat of dust, crushed gravel, bugs and sweat covering a good portion of my body by the time I was done.

I ended up riding 20.25 miles in 1 hour, 44 minutes. Most of it was fine. Except for on the way back when I was riding into a stiff wind. But even that wasn't too bad.

I enjoyed getting back on the trail. The next time I have an entire day to myself with nothing to do and it's nice outside, I might head back. Only this time? I want to go even farther.
Posted by Badgergirl at 4:28 PM

Email ThisBlogThis!Share to TwitterShare to FacebookShare to Pinterest
Labels: Pedalin' my bike

Would you believe I"ve NEVER been on the Wiouwash trail? Heck, I'm not even sure I know WHERE it is! How sad.

Never been on the Wiouwash trail Jess? I must take you sometime!