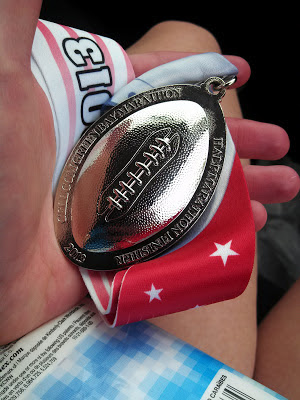 This is one of those races where the final three-quarters of a mile make the rest of it worth it.

I headed into the Cellcom Green Bay Half Marathon under-trained and not so prepared. I knew I wouldn't be fast. But I knew I could cover the miles, if anything for that lap around Lambeau Field.

Because who am I kidding? That's my favorite part of this race.

I headed up to the expo on Saturday and picked up my packet. After Mom and I had lunch at Curly's Pub, we headed out to drive the course. I just wanted to familiarize myself with it, even though I've run this enough times that I remember the roads well. Like, I know not to look to my left around Mile 10.5, because I'll see Lambeau Field looming and I'll still have almost 2 miles to go.

I went to bed Saturday night, set my alarm for way too early in the morning and the next thing I knew, it was time to get up and run a half marathon. We made it up to Green Bay with about an hour to spare. That gave me plenty of time to get a decent parking spot, hit up the bathrooms twice and try to talk myself into being able to do this.

Soon it was time to hope the fence and get into the mass of 7,000 runners on Lombardi Avenue who were running the full or half marathons.

One cool thing race organizers did. In the wake of what happened at Boston last month, race organizers put together a tribute to Boston. Each runner Sunday got a blue silicon wrist band in their packets that said "We Run As One" and "Boston 2013." After the national anthem was sung, we were all asked to raise our wrists in the air and observed a 26 second moment of silence. It was pretty powerful. 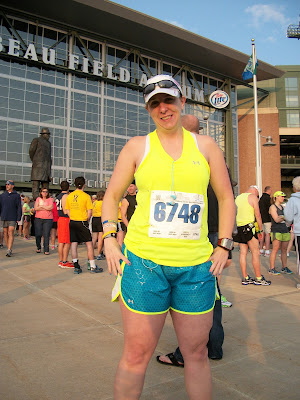 Pre-race photo with Vince looking on in the background.

After that, it was go time.

There was nothing special about the first miles of the course. I ran. Kept a decent pace, only walking briefly through the water stations. I saw my Mom around Mile 4 and tossed her my iPod.

Oh, did I forget to mention that? As I was standing at the start line, I went to turn my iPod on so all I would have to do was hit play. Instead of hearing Dropkick Murphy's in my ears, what did I hear? Absolutely nothing. No lights either. That's right, even though I had had it plugged in and charging overnight (or so I believed), I had a completely dead iPod. Leaving me to run 13.1 miles without music. Something I haven't done in a long time. 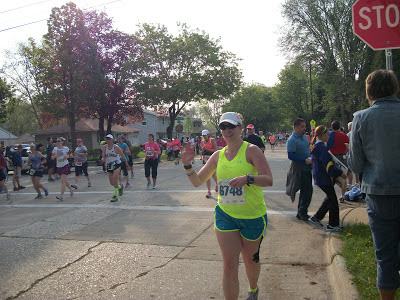 So I tossed the iPod to my Mom and settled in for another 9 music-less miles.

Somewhere around Mile 6 it started to get pretty warm. There were few clouds in the sky and at this point we were leaving the shaded residential areas. So lots of sun, little shade, rising temperatures and it was starting to get humid. Oh, and no wind. Great.

Knowing this and knowing I wasn't really prepared, I started to sprinkle in the walks. Because I really didn't want to overdo it and I didn't want to leave Green Bay hurt. So I didn't feel bad. I mixed it up, running, taking a bit of a walk at the water stations and then running.

Pretty soon Lambeau Field was on my left - yes, I looked, even though I knew not to - and I was running through the somewhat dull industrial-type area. But then I turned left and there Lambeau Field was. Right in front of me.

I ran. Chatted with a runner next to me a bit. And kept my eyes on the prize - Lambeau Field. Through the parking lot and into the stadium. Funny thing, as soon as I entered into that entrance, I could feel this smile spread across my face. Others around me were slowing down to walk. But I didn't. 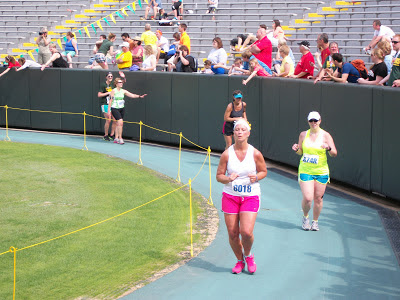 I was going to run every step through that stadium and savor it. This. This is why I run Green Bay.

I hit the end of the players' tunnel and there was a volunteer.

"Welcome to Lambeau Field," he says. 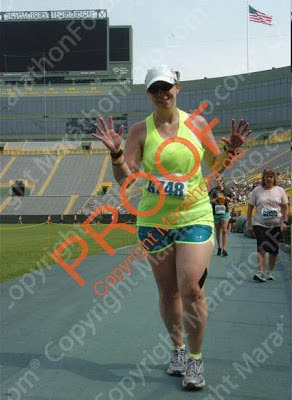 One of the best race pictures I've ever taken. Not worth the money they'd charge me for it though.

I kept running. Looking around. Smiling. Relishing the moment. I tried - unsuccessfully - to give my Mom a high five as I ran past. And then I was heading back up the players tunnel and exiting the stadium to the finish line.

It wasn't my best time. The clock read 2:54 when I finished. But given my lack of training and the heat, I'm OK with that. Because, you know what? That last three-quarters of mile through the stadium made everything worth it. 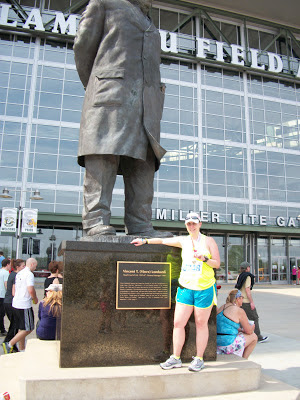 Everyone needs a post-race picture with a headless Vince Lombardi.
Posted by Badgergirl at 9:00 AM

I think it's so important to celebrate the fact that we CAN run- and not necessarily how fast or far. That said, nice job on finishing your half strong- and looking STRONG doing it!
Sarah
www.thinfluenced.com