I've been pretty spoiled the last few years. I've had pretty good weather conditions when it comes to race day. 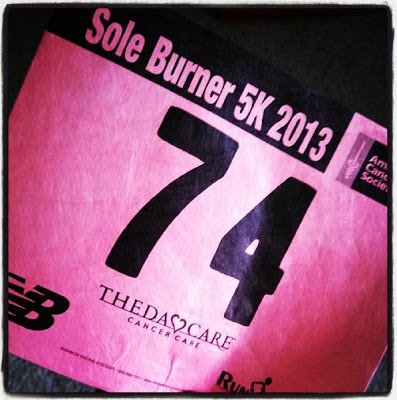 It was time for the annual Sole Burner 5K, a race that benefits the American Cancer Society. I've done it the past few years with my Dad. His company is one of the big sponsors, so they encourage employees to participate.

When my alarm went off Saturday morning, I really wanted to just turn it off and go back to bed. I could hear the wind howling outside my window. And I already knew it was going to be cold. I put off getting out of bed as long as I could, but eventually I got up, got ready and we were out the door.

Honestly, if it wasn't for the wind, it really wouldn't have been a bad day to run.

Along with the other 7,700 people who were going to be running or walking, I lined up before the start, waited for the gun to go off and six minutes later I was running. 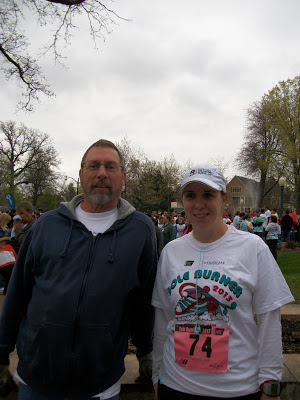 Shortly before Mile 2 I turned and headed south, thankfully I wasn't battling the wind anymore. Unfortunately right around then was when it decided to start raining. It wasn't awful, a light mist, but I was pretty sure it wasn't going to stay that way.

So I kept running and by the time I made it to the Hill of Hope, a nasty hill right around the 2.75 mile marker, it was coming down harder. And that light mist had turned into some kind of sleet mixture. And as much as that hill stunk and as much as I wanted to walk, I knew that would mean it would take that much longer to get to the finish. So I kept running. 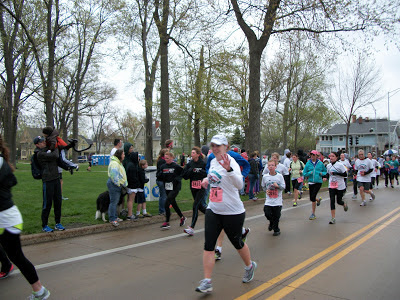 I ended up finishing in 34:20. Not awful given conditions.

Now hopefully Mother Nature got the crappy weather out of her system and my luck with weather conditions return. Because I really don't want to deal with nasty weather at Green Bay this weekend.
Posted by Badgergirl at 8:30 AM

Nice! That's some serious wind. I really hate biking in that kind of condition, but running into a headwind can suck the life right out of you. Good times!