It shouldn't be a surprise. I like the Packers.

So when I was presented with the opportunity to go the Packers Tailgate Tour stop in Oshkosh last night, I jumped at the chance. Packers? Tailgate fun? And not have worry about doing work stuff? I was in. 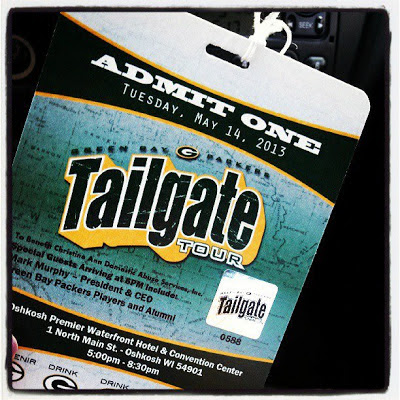 Each spring, the Packers put together this tailgate tour. A couple of current and former Packers jump on a bus and they head out to a couple of official stops, but they throw in a couple of surprise stops along the way. This year Randall Cobb, Jarrett Bush and Alex Green would be joining former Packers Santana Dotson, Frankie Winters and Aaron Taylor along with Packers President and CEO Mark Murphy. The Oshkosh stop was the first one of the tour.

I had to work late, but as soon as that last question was asked, I headed over to the tailgate festivities. I walked in in the middle of the Q&A session. I met up with some friends and after the Q&A and some games were done, it was time to head into the lines. We had to make a choice: Line up for food right away or line up to get our autographs.

We opted for autographs. The food could wait. 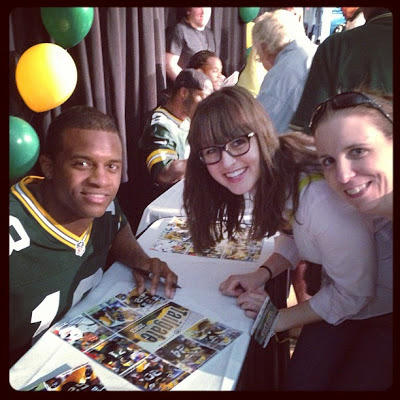 And it was a good decision, because it took us an hour to get through the line. But finally, it was our time to walk across the stage and get an up close look at the players as they signed our stuff. I put my poster on the table and watched as they signed it.

And of course we snapped a few pictures. 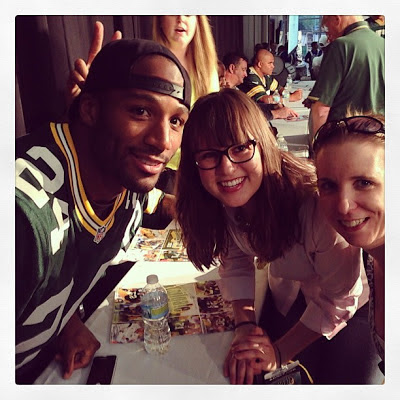 And we're BFFs with Jarrett Bush.

But somewhere between Alex Green and Santana Dotson, a crime occurred. 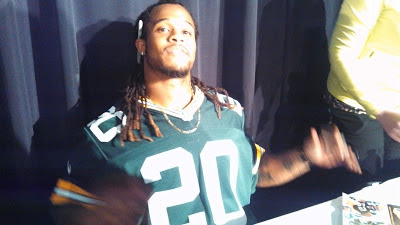 Because the "die hard" Packers fan behind us in line -- well he stole my poster.

See I watched my poster get signed, followed it through the line and when I got to the end? There was no poster! Now, the people in front of me? Well, I was with them, so I'm pretty sure they didn't take it. But that "die hard" (which by the way, what die hard wears a blue beer shirt to a Packers event? Not much of a die hard if you ask me)? He ended up walking off the stage with a miniature helmet AND a signed poster.

Now, normally I'm not a confrontational person. But last night? I confronted the dude.

I went up to him and told him I was pretty sure he had my poster. I stated my case. His response? It wasn't him. He watched as his poster and miniature helmet went through the line.

Well, we were only allowed one item to autograph and they were pretty strict about that. So I really didn't buy that story.

And then? He pulls out his signed poster and an unsigned poster (once again, we were allowed one and they were strict) and had the nerve to offer me the unsigned poster! Dude. He knew he swiped my poster. Something I confirmed by the fact that he skedaddle out of the room as quickly as he could without looking back. 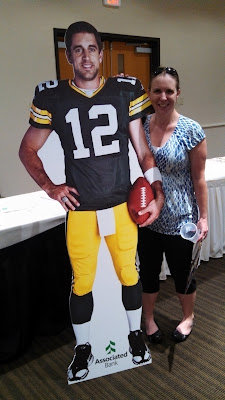 I may have run into Aaron Rodgers.

Now. It's a poster. With autographs. That I waited for for an hour. It would have been cool to have.

But really? Bigger picture-wise, it was a charity event. Something the Packers don't have to do. And for this dude to steal some one's autographed poster, just an extra set of autographs? That's low.

I just hope he can sleep at night.

Other than my run in with the poster thief, if it was a fun event to go to. And I got some cool pictures.

If the event comes back to my area, I'll go again. I'll just make sure to stay away from shady looking dudes would could be potential poster thieves.
Posted by Badgergirl at 9:26 PM

What a jerk. Really dude? REALLY? So sorry that happened....