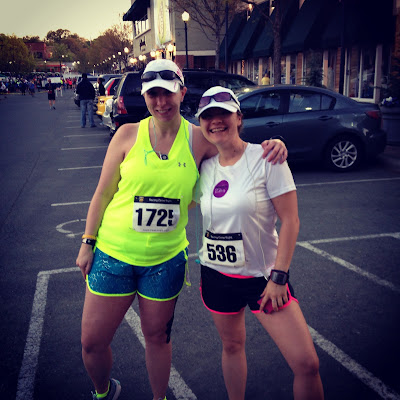 Times don't matter when you get to run 13.1 miles with your BFF.

Piece of advice, if you're going to set a personal worst for a half marathon time, make sure you're running the race with one of your best friends.

Trust me. It makes the result a little less painful.

Yes. The RunRaleigh Half Marathon? My worst half marathon ever. Timewise. But in terms of fun? Oh, yes. So much fun.

Jess and I came up with this great idea back in February of me going out to visit her in Raleigh and we'd run the RunRaleigh Half Marathon while I was there. At that time, we had like 11 weeks until race day, plenty of time to train, prepare for the hills and get into half marathon shape.

Well, first the hill work outs vanished. And then I started missing some long runs. And, well, let's just say I was woefully unprepared. But the plane ticket had been purchased and I hadn't seen Jess in over a year, so I HAD to go. Thankfully we weren't running for any kind of time goal. Just to finish. And have fun.

Race morning dawn bright and early. Temps were in the low- to mid-50s, perfect weather for this Wisconsin girl. Although I did have to chuckle a bit to myself. While waiting for the race to start I could totally tell who the true southerners were - long pants, long sleeves and gloves. 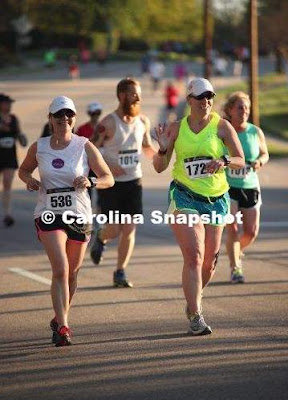 The smile is hiding how much I'm struggling. And this is around Mile 2.

The gun went off and we started running. Uphill. I should have been tipped off immediately that this was going to be a rough day. But I thought it was just a short uphill. Well, we kept running and before we even made to the first mile marker this was feeling way too hard. I mean, seriously. I wasn't even a mile in! Well, I glanced behind me. No wonder if felt hard. I'd been running uphill for almost a mile.

I sucked it up. Took advantage of a short flat section - very short - and kept running.

For the first 8 miles or so, that's what it was. A constant barrage of hills. A nasty one right around Mile 4, but mostly rollers. And somewhere around Miles 5-7, it was a relatively flat section, but the pavement had this weird camber to it, which made it tough. And made my IT band slightly angry. 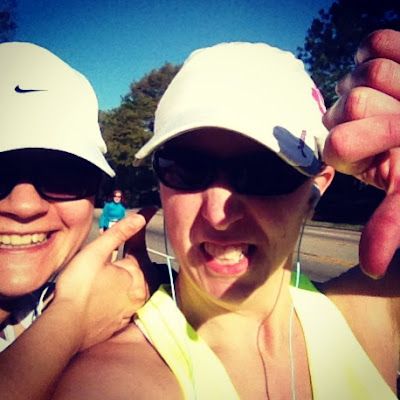 Somewhere around Mile 7. Obviously Jess and I have differing views on the hills.

So I had an angry IT band from the road camber and quads that were pretty much trashed from the hills in the first 8 miles or so. I made an attempt to run the downhills, but I caved and started walking the uphills. And then I found myself having to walk in the short flat sections.

Seriously. Had Jess not been by my side, I would have curled up on the side of the road, cried and waited to die. But she wouldn't leave me.

There was A LOT of walking between miles 9 and 12, when we were faced with another nasty uphill (one that was so fun to run down at Mile 4). Ironically, those were the flattest miles of the course. We were on this greenway through the woods, which seemed really pretty. And then I heard someone refer to it as "the woods where the rapists live." Oh. That's great. Or maybe the escaped prisoners. After all, we did pass two state prisons on the route.

I threw in some running, er, shuffling, during the final mile and amazingly had enough in the tank to really run it in to the finish line. 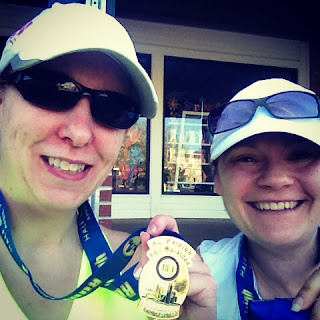 A personal worst in terms of time. Not one that I'm proud of, but I was psyched to run with Jess. And I have to keep reminding myself that that was seriously the toughest half marathon course I've ever run. Even if I had kept up with long runs and been better with hill intervals, I'm pretty sure I would have still struggled. I'm just not sure how this Wisconsin girl could have prepared for that course.

Ooh! And I got to meet up with Carolina John! But more on that meeting later. Because my time with CJ wasn't limited to a quick hello at the starting line.

Up next: What I did during the rest of my vacation to Raleigh, otherwise known as the place where I could wear tank tops and flip flops!
Posted by Badgergirl at 9:00 AM

hehe. I LOVE IT!! It was awesome - even if the time sucked. We shall redeem ourselves!! I was just thrilled to have you here & get to hang out with you!! :)

yea getting to meet and hang out with you & Jess was certainly my highlight of that race. It's a tough course, even for around here. and I've come to the conclusion that it's impossible to really prepare yourself for those kinds of hills. My triathlon this past weekend proved that. disturbing.

As long as you got to try something new and had fun then it's a win in my book. Great job!

Yikes, sounds like a super hard course! At least you had great company along the way.