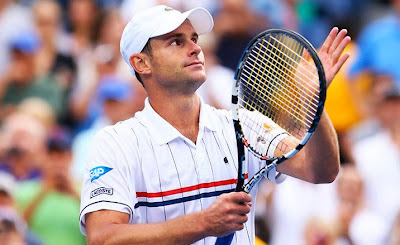 I knew the day was coming. But it was still hard to see it. And yes, I may have almost shed a tear or two while sitting at my desk this afternoon, watching as Andy Roddick, my favorite tennis player during the last decade, lost the final games of his fourth round match at the U.S. Open today.

To see him fight until the end. Hear the crowd chanting "Let's go Andy." Watching him get up out of his chair during that final changeover and wipe his eyes with his towel as he walked back to receive serve from Juan Martin del Potro in what would be the final game he played.

But Andy went out on his own terms. He announced it last week. Had a couple of inspiring, fun matches in the second and third rounds. The U.S. Open, the site of his only Grand Slam title, and a tournament that held a special place in his heart, was a fitting place for him to end his career.


"Since I was a kid, I've been coming to this tournament. I felt lucky just to sit where all of you are sitting today, to watch this game, to see the champions that have come and gone. I've loved every minute of it.'' - Andy Roddick

Heck, his whole farewell speech had me tearing up. Watch for yourselves.

Thank you Andy for all the matches over the years. You will be missed.

Posted by Badgergirl at 9:54 PM

Email ThisBlogThis!Share to TwitterShare to FacebookShare to Pinterest
Labels: Randomness