It's quickly becoming a September tradition.

Head down to Madison and spend all day running around cheering on a friend as they travel 140.6 miles. In the process? Get inspired and have an amazing day.

I went back down to Madison last weekend for Ironman Wisconsin spectating. Last year it was to cheer on my good friend Jeff as he completed his 10th Ironman (a number he's since increased to 11). This year I was there to cheer with my friend Myriah as her husband Josh tackled his first Ironman.

I headed down to Madison on Saturday after I finished my 13 miles run. I met up with Myriah and her family at their hotel and then we proceeded to hatch a plan on for spectating. Myriah and her Ironman-to-be would be leaving the hotel super early, I was responsible for making sure their families - I bet there was close to 20 of them - made it down to the Monona Terrace in the morning for the swim start.

I'm happy to report I did it. And no family members were lost! 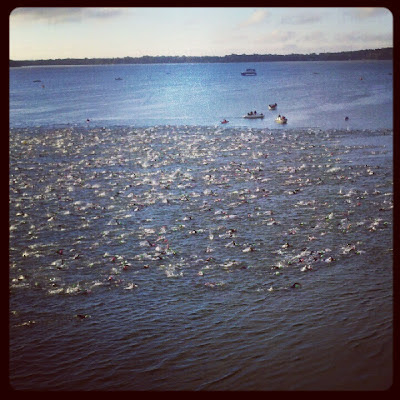 We staked out a spot on the helix by my friend Jeff - who had come up to Wisconsin that weekend to do a triathlon and watch Josh at Ironman. It was hard to see the actual swim since we were in an area with a bunch of people. But if I stood on my tiptoes, I could catch a few glimpses of the swimmers. Of course, the swim start was just as cool as I remember it. About an hour after the pros started swimming, we could hear a roar coming up the helix and all of a sudden the first swimmer out of the water was running past us into transition. 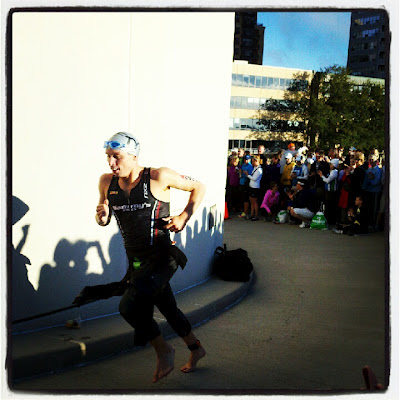 Let me say, what I couldn't see of the swim was more than made up for by the spectating spot I had to watch athletes run into transition. For those going to spectate at IM Wisconsin in the future, I definitely recommend staking a spot out on the helix. So cool. 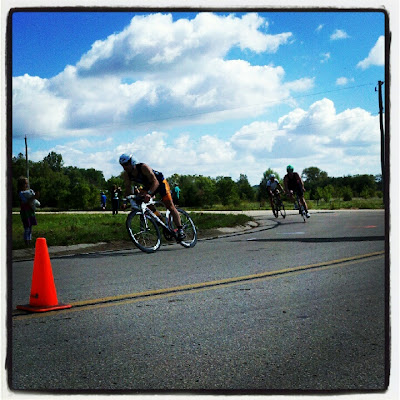 We gathered our group up and headed to the bus to go back to the Alliant Energy Center. Then it was time to hop in the car and head out to the bike course. Josh was flying on the bike, as in we weren't going to make it to the first planned bike spot in Verona at Mile 15. We decided to head out to Timber Lane instead. I thought we were going to the big hill on Timber Lane where I was spectating last year, but I was a poor navigator and took a wrong turn. So we were on Timber Lane, just AFTER the crest of the hill. Oops. It's OK though, we still saw Josh and then headed out to a location just west of Verona (around Mile 62) where we saw him again. Back to Timber Lane - the right spot on Timber Lane - for one final chance to see Josh on the bike. 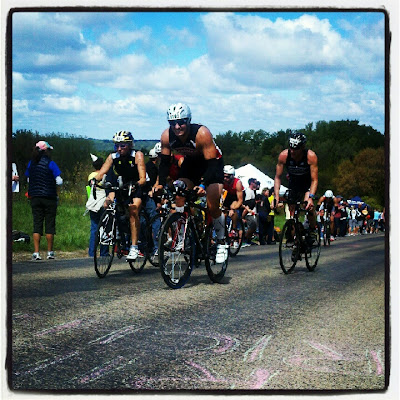 Like last year, the energy on Timber Lane was amazing. Tour de France-like. Crowds lining the road. People in costumes. Drummers running alongside the athletes as they biked up the hill. So cool. 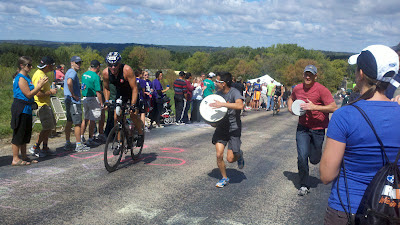 Once we saw Josh, we piled back in our cars (to give you an idea of the size of our group, we filled three cars) and headed back to downtown for the run. They jumped back on the bus. I jumped in my car to find parking near the Capitol Square so I could jump on my bike. My plan was to meet back up with Jeff and chase Josh around the run course.

First I waited right around the run out point for Josh to come through. While waiting, I caught a glimpse of the lead male, who had a huge lead on second place. And you know what? He kept increasing that lead throughout the rest of the afternoon on his way to a new course record. Amazing. He never looked tired. So fluid. So fast. Looked fresh. 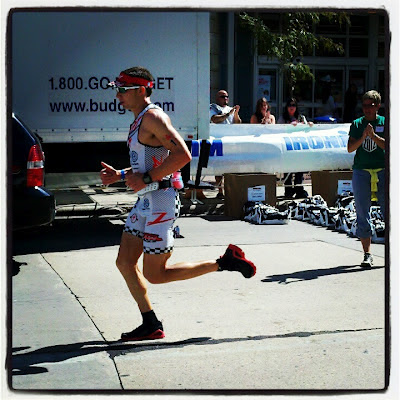 Anyway, soon Josh came through and I was off. I made a pit stop by Myriah and told her my plan and that I'd be sending her updates throughout the afternoon. I met up with Jeff and we were off. With Jeff having done this race multiple times and both of being UW grads, it's not a surprise that we had a good idea of where to go and the shortcuts to get there. I think we ended up seeing Josh 5 or 6 times per 13 mile loop. And by the time he got to the second loop, we needed to know where those shortcuts were! I swear Josh was getting faster because we would barely beat him to the viewing points! He went through his cycles of good and bad, but overall, Josh looked strong on his way to a 3:35 marathon. Seriously. Guy is fast. Josh ended up finishing Ironman in 10:42ish. Not bad for a first Ironman, huh? 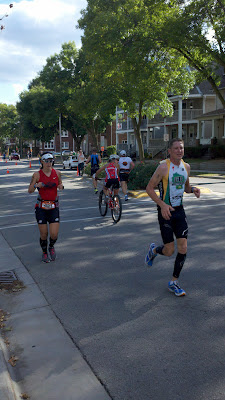 The Ironman-to-be that I was chasing all day, on the right.

Once again, it was a long day. It was a hard day of spectating. But it was so worth it. Watching the athletes, many of them just like you and me, put out the effort to travel that 140.6 miles. Some of them hurting, but all of them moving forward. And once again, when I'm at Mile 11 of my next half marathon and I'm hurting and just want to quit, I'll think back to those Ironmen. Chances are, they were hurting a lot more. And they kept going.

So congrats to all the finishers at Ironman Wisconsin! I'll be back in 2013 to cheer again. And next year? I'm pretty sure I'll think ahead and take Monday off so I can experience that final hour at the finish line. See you then!
Posted by Badgergirl at 9:00 AM

The mass swim start is one of my all-time favorite things to watch.

I'm exhausted just reading that! So cool, I'd love to spectate/volunteer at an IM someday.

sooooooo....when are you signing up?

I had a great race at Imoo (finally finished!). It was a wonderful day and a lot of thanks is due to spectators, who really help us out with smiles, cheers and support.

I think that sounds like a good year for YOU do to IM!