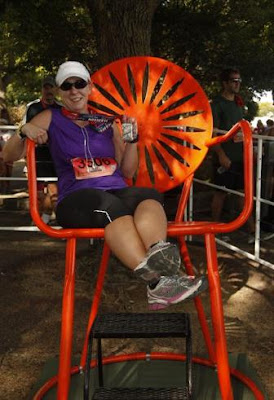 If only I could have stayed in this chair the rest of the afternoon.

Race day didn't go quite exactly as planned, but I think the Madison Mini may have been the race that I've had the most fun at this year.

Why? Well, yes. Being in Madison and running through campus has a bit to do with it. But the big reason was the people. I got to hang out with some great people during the race weekend. Some I had met before in real life, but most? Most were people I've known and interacted with on Twitter for months.

From the expo to a big group dinner at Tutto Pasta on State Street the night before to running and then enjoying post-race refreshments on the Terrace and lunch on the Capitol Square. Such a great group of people and so much fun. 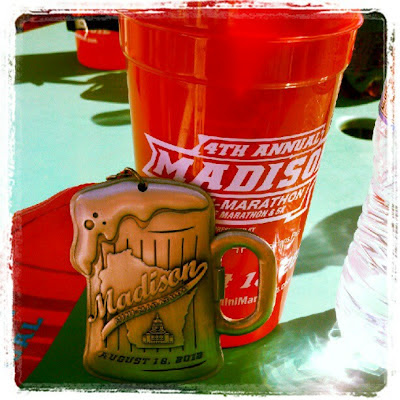 The bling. A medal that doubles as a bottle opener and the free beer.

So the race. What happened.

Leading up to the race, I always had plans to run this race as a training run. It would be the first time I've run 13 miles since way back in May and given the summer of training I've had with the pesky IT band, I wasn't sure if there was speed in me.

But then Katie and I start talking. And numbers are thrown around. 2:25? Could I do it? Would my IT band allow me to do it? Well, knowing I'd be running with a friend made it sound not so scary. And all of a sudden I found myself with a race plan and a goal of hitting a 2:25 half marathon on a fairly hilly course in Madison. 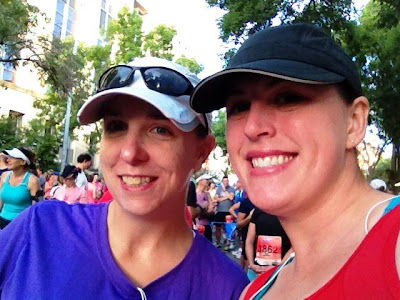 I met up with Katie on the steps of the Memorial Union with about 15 minutes until the gun went off. We took some pictures, handed off our bags to her husband Wyatt and set off for our corral, where we met up with another friend, Aaron. We chatted for a bit and then BANG, the gun went off. We started running and I got a starting line high five from Bucky Badger (which will tide me over until football season starts).

Katie and I had plans. While we wanted to hit a 2:25 and knew this would 11 minute miles, we also knew that we wanted to a build a little bit of a cushion in the first miles in preparation for the hills the Arboretum would throw at us later in the race.

And build a little cushion we did. We kept it easy as we ran down Langdon Street, past the Capitol and down State Street. We swerved through campus, passed the dorm I lived in, the Kohl Center and Camp Randall and headed towards Vilas Park. We were running side-by-side, both of us plugged into our headphones, but still having some random chatter.

We hit the Arb and kept running. And you know what? My IT band wasn't screaming at me as we conquered the hills. We passed the 10K mark, had some momentary confusion about just how many miles we had left at the 5 mile mark (note: it's not 7) and kept putting one foot in front of the other. We had a plan to run every single step through the Arb with the exception of the aid stations. And we were following that plan.

Until I got a freaking side ache. What the heck? I can't remember the last time I got a side ache while running. And this one was in a weird spot. Not quite my side, but closer to my back. Odd. And it was hard to run. I slowed down, watched Katie get farther ahead of me. And then - at the last freaking hill in the Arb - with an aching side, I had to walk. It pained me to. But I couldn't run. I needed to slow my heart rate down, get rid of that ache in my side.

Katie glanced back and I waved her ahead. It pained me to do it, but I did.

I walked a bit. Got rid of the pain in my side and started to run again. I went back to following my plan of running and then walking the aid stations. I had to throw in one more unexpected walk around Mile 9.5-ish. It was a particularly brutal stretch of never ending uphill, but I didn't let myself walk long. 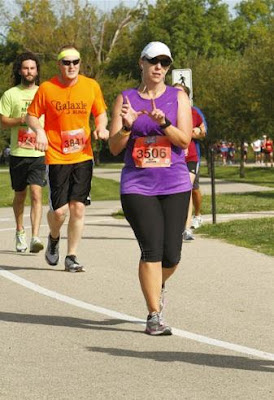 Pretty soon I was on the west end of campus near UW Hospital and getting ready to jump onto the Lakeshore Path for the final 1.5 miles and I saw Katie. I yelled for her, hoping she would hear me and I got a yell back. I wanted to lace my encouragement with some profanities - the original plan was that profanity would be allowed starting at Mile 9 when we both knew it would start to be a mental struggle - but I opted not to since there were little kids around.

I kept running. One last short walk at Mile 12 and then I knew I was almost done. I came off the trail, was running behind College Library and made the turn onto Park Street next to the Memorial Union. One last little nasty uphill to the final turn onto Langdon and the finish line. 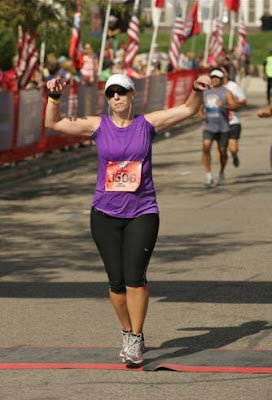 I had a nice little kick and crossed the finish line in 2:30 and some odd seconds. I was happy. I crossed the line, got my medal and snacks and was walking up towards the terrace for a post-race photo in an over sized Union chair when I saw Katie right in front of me. 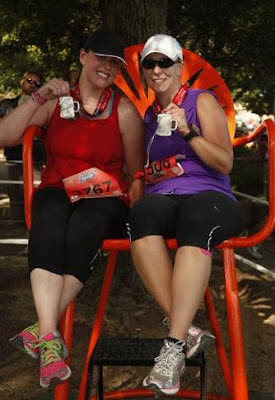 Quite possibly my favorite picture from the race. 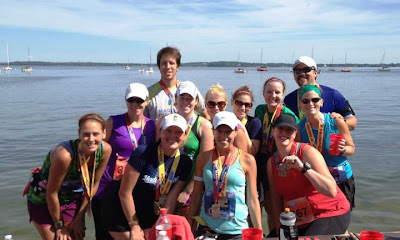 This is a close second. Some of the peeps I hung out with during the weekend.

Overall, I'm happy with my performance. When I was planning on running this as a training run, I was aiming for a 2:30 finish, so this was right on track. Yes, there is a little piece of me that wonders if I could have hung with Katie (who finished in 2:25 and some odd seconds) and hit our goal, but I can't let myself get hung up on that. Especially when I look back and compare this year's result with last year. I finished 2 full minutes faster this year on a tough, hilly course. And I haven't been training hills this year and been struggling with an IT band issue that doesn't like hills at the moment.

It was a good weekend. Can't wait for next year!

*Note: Other than the "official" race photos, I stole the rest from Katie's Facebook page.

Posted by Badgergirl at 9:00 AM

You persevered! SO proud of you! And that's a great time!

It was a fun weekend. Next year the race will come together for both of us.

Great race! I've been getting some side stiches lately too. not cool man, not cool.