The Firecracker 5K, also known as the time I almost pulled a DNS.

That's a "Did Not Start" for those unfamiliar with the race lingo.

Independence Day dawned hazy, hot and humid. I'm not kidding. It was 85 and humid before the parachuters fell to the ground before the 8 a.m. start time. So freaking hot I could feel the sweat dripping down my back as I stood in what very little shade I could find. And since it was so miserable, my head was throbbing. To the point where I was a little nauseous. A state I don't get to very often.

Add to all that my super cranky IT band was screaming at me. I had been to my first physical therapy appointment the day before and I was being reminded why I was going to PT. It hurt. A lot. Painful. 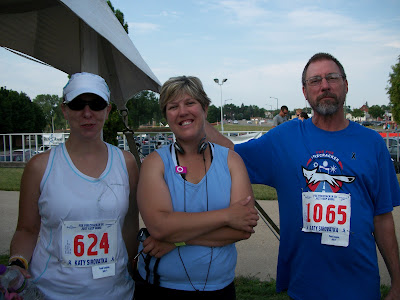 I don't look very thrilled, do I?

So minutes before I was supposed to head over to the starting line, I was seriously considering not even starting. But even if I didn't start, I'd still have to wait around while my Dad walked. So I decided even if it was going to hurt, even if it was hotter than Hades, I would finish the 3.1 miles. Somehow.

I lined up, the gun went off and immediately was cursing the race organizers. The route had to be altered a bit this year due to some construction. So we started uphill. Yes, you read that right. An uphill start. Over a grated drawbridge. Wonderful.

My IT band was really screaming now.

I kept going. Slowly. Kind of painfully. Saw my Dad pass me. Yes, my Dad who walks and throws in some short runs. Talk about a way to kill my confidence. I kept going though, but with every step I was planning on how I could quit. See the course made a loop to start, which would have brought me right by the start/finish area after about a mile. I could have just gone the first mile, then dropped out. A DNF is a little better than a DNS, right?

But I got to that point and for some reason I didn't stop. Instead I made a pact with myself. Run what you can, walk when you need to and for heavens sake walk those uphills because your IT band hates them. And don't die. It's too blasted hot to try to have a stellar race when you're first starting to rehab an injury.

So that's what I did.

It was slow. It was kind of painful. But I did manage to hit every single sprinkler that I could find during that 3.1 mile journey. And I was still the first one of my family to cross the finish line. Honestly I don't even know what my time was and I really don't care. All I know is that I didn't die. 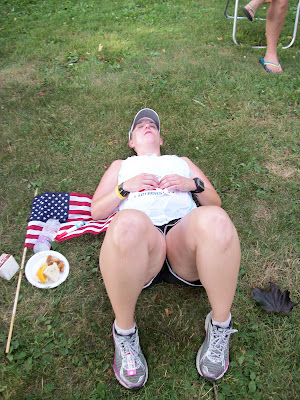 Apparently I waited until I was done to almost die. Also known as, I can't believe I'm posting this incredibly unflattering picture.

I finished, hit stop on my Garmin and kept walking. I didn't find my Mom immediately. Instead it was off to the area with water and food. Not that food sounded appealing. Because it didn't. No, I was in search of water. Lots of water. And ice. I found some, shoved a handful down my sports bra and a handful in my hat. Then I went to find my family and some shade, where I felt like I was going to die.

Happy Fourth of July.
Posted by Badgergirl at 9:00 AM

Good job on toughing it out!

Way to get it done! The 4th was miserable... We even skipped the parade!