The hill couldn't beat me. 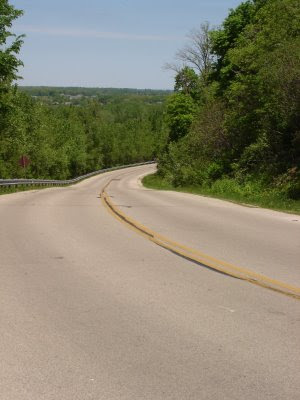 I took advantage of the long holiday weekend and put in some miles on both the bike and the running shoes.

After getting done with work Friday, I loaded up my bike, some weekend essentials and a bunch of dirty laundry and headed north to my parents' house. I was planning on grabbing dinner with them and calling it an early night since I was supposed to be doing a run with my sister-in-law in the morning.

Plans changed and the run didn't happen. Which is maybe a good thing since it was raining in the morning. But I still had my fingers crossed that the weather would clear up - like the weathermen said it was supposed to do - because I had plans to hit High Cliff State Park in the afternoon to face the cliff road.

It kept raining. And raining. Finally it cleared up late in the afternoon, but by that time my desire to tackle the hill was gone, so I hopped on my bike for a 17-mile ride instead. The roads were still a bit wet and I got a bunch of mud on me, but it was a good ride. One that left me ready to face the cliff in the morning.

Sunday dawned bright and sunny. I got up, had a small breakfast and loaded up my bike and the rest of my stuff. I had plans to tackle the hill a couple of times and then follow it up with a short run on some of the trails in the park.

I admit. I was scared of that hill. It's not a continuous climb. Or maybe it isn't, but it doesn't look like it. There's a fairly short steep uphill portion right at the beginning. But then it looks like it evens out for a while before the second, longer and steeper climb shows up. After riding it, I've come to the conclusion, that flat portion? It doesn't exist. After finishing the second climb, there's another gradual, long climb until you read the top of the cliff. In all, it's about a 1.5 mile climb from the parking lot where I parked to the top. What a great way to start off the 22-mile bike portion of the High Cliff Triathlon.

I buckled my helmet, adjusted the sunglasses, took a deep breath and started pedaling. Midway through that first climb I almost stopped and cried. It was hard. I was standing up pedaling and felt like I was going to die. And I wasn't even to the hard part yet. But I kept going. And I started putzing with my gears. Went to a lower gear. And then lower. Pretty soon I was at the lowest gear possible - gears I hadn't even thought about using before. But that second climb? It was getting easier. I took a quick breather at the top of the second climb before continuing to the top.

Then I went back down - riding the breaks a good chunk of the way down.

I turned my bike around in the parking lot and headed back up again. The second time it was easier. Now that I had that whole gear thing figured out. Made it to the top. Back down. Repeat a third time. As I was going up the third time I was thinking to myself. This cliff road isn't so scary. Or intimidating. I can totally do this on race day. I may not be the fastest one to the top, but I won't be walking my bike uphill. All I need to remember is to keep it in a low gear, keep pedaling and eventually I'll make it to the top. 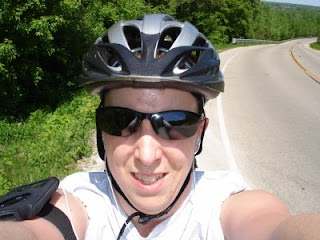 And I was at the top. So I turned around for my last trip down the cliff. By this point, I was feeling a little bit more comfortable with the downhill and I wasn't riding the brakes as much. And it showed. I broke the posted speed limit for vehicular traffic - which was 25 miles per hour - when I glanced down at my bike computer and saw I was cruising at 27 miles per hour. Those would be tears of joy that were streaming down my face.

The good feeling continued on the trails. I almost tripped over a few tree roots and big rocks that were sticking out of the ground. But I felt pretty good on the run once I got rid of the dead feeling in my legs. Covered about 2.5 miles in 30 minutes. I'd say it was a pretty good brick workout.

Then it was off to a family cookout. And today's run? It got canceled because the swarms of lake flies have returned to my neighborhood. Grr.
Posted by Badgergirl at 8:52 PM

Nice job on tackling that hill!!!! The more you do it, the easier it will get.

One thing I didn't realize until recently was that if you are starting a long climb you are best off getting into your easiest gear and spinning at a high cadence from the get go, rather than gearing down as you go up and get more tired. Give it a try next time and see if it helps you out.

Thanks for the advice Leana!