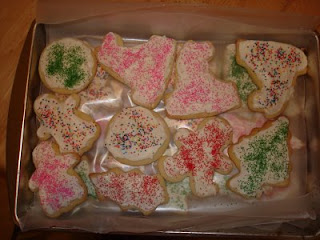 It's been a tradition in my family for as long as I can remember. The only thing that's changed? The sheer size of the operation.

My mom, brother and I used to go over to my aunt's house each Christmas to make cookies. Just the four of us in a cozy kitchen with Christmas music filtering through the house. Granted, my brother and I? We weren't much help. Sure, we'd cut a few cookies out using a cookie cutter, but the cookie making business kind of lost our attention after a few minutes and we'd be off, causing trouble with my aunt's dog or something.

Eventually my brother stopped going. Then I went away to school and stopped coming. But the cookies were still made.

I returned to the cookie making operation a few years ago. But by this point it had grown in size. Another aunt was thrown into the mix. And the recipe we used to double when I was a kid? Suddenly we were tripling it. And if that wasn't enough, one year we even quadrupled it. That, my friends, is a lot of cookies. We had so much cookie dough, we needed a second bowl just to mix it all up!

This year we were back to tripling the batch. We ended up with 30 dozen cookies plus a few "test" cookies along the way. For the mathematically challenged (I'll admit, I used a calculated here), that's 360 cookies if you don't count the test cookies. And we were done in about two hours.

The ingredients. See that can of Crisco hiding underneath the partial bag of flour. That's a 48 ounce can. Keep the size of it in mind. It'll be important in a moment. 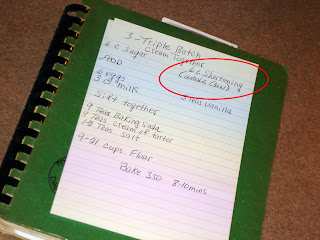 The recipe. We know it so well, it's just written in shorthand. We don't bother measuring the shortening anymore. A few years ago we realized six cups is the ENTIRE can of Crisco. Now we just dump the whole thing into the bowl. 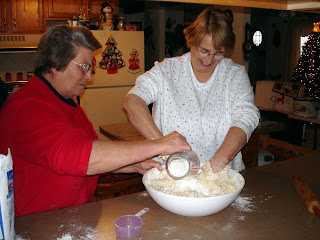 For the record, this year we used about 22 cups of flour. That was the entire partial bag of flour that was sitting on top of the Crisco can and about half of the 10-pound bag of flour we had on hand. That's a lot of flour. 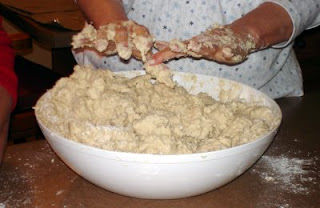 And when you're talking that much flour, you don't bother with mixing spoons. You just use your hands. Don't worry. All hands were washed prior to the cookie making extravaganza getting underway. 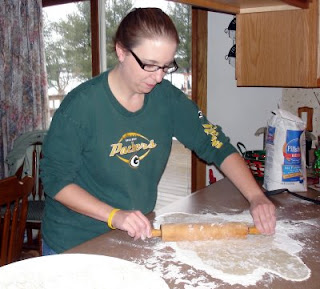 For some reason, my mom and aunts think it's important for me to learn how to roll out dough, something about me taking over the entire cookie operation when they can't do it themselves anymore. Yeah. I tried in the past and failed miserably. This year? I lasted exactly two attempts at rolling the dough before I got sent back to my speciality of manning the cookie cutters. Apparently I'll a slow dough roller. 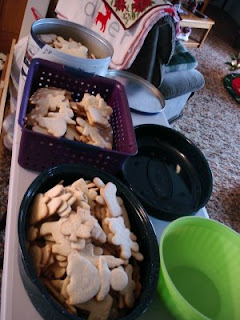 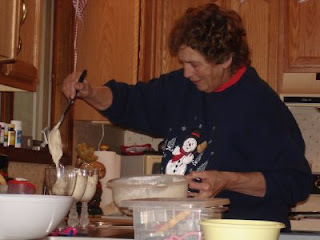 Once the cookies are finished, the dishes done and the kitchen cleaned up the cookie making extravaganza is nearly done. But you can't make 30 dozen cookies without celebrating with a treat. In this case, an alcoholic ice cream beverage. Needless to say, this is a fairly new step in the cookie extravaganza that was not around back in the early days when I was a kid. 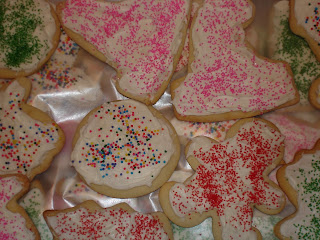 Once the drinks are finished, we all head out the door with our bucket full of freshly baked cookies. Then it's back home for the finishing touches - frosting and sprinkles. And mine? I store - and eat - them right from the freezer. Yum.
Posted by Badgergirl at 8:59 PM

oh yum! I made sugar cookies today too ... only I cheated and used the pre-made dough from Festival. :)

Oh, and I'm a failure at rolling dough too.

Aww, what a sweet tradition!

Mom and I just undertook the cookie decorating endeavor last week...though not quite to this degree. I am impressed :)