Now that it's done, can I do it again? 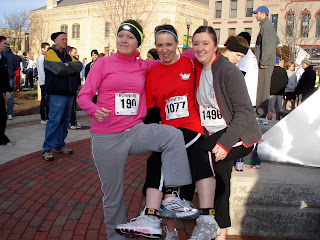 And it was fun. Enjoyable. And I'm totally looking forward to doing it again. I think I'm hooked.

I got downtown early, about 40 minutes before the race, just to meet up with the running cohorts and stand in line to get my chip timer, a device that made me totally look like I was an inmate at the county jail who had behaved enough to get released on GPS monitoring.

It was little chilly standing around, but once the air horn went off signaling the start of the 5K, I was fine. Although my hands were a bit cold.

The run itself was fun. For the first mile or so, I ran with Mandy, but I lost her somewhere around the first water station. The course was nice though. Flat, interesting scenery and even though it was early and I wasn't one of the half-marathon runners, people came out of their houses and stood at the ends of their driveways to cheer us on. Thanks guys! 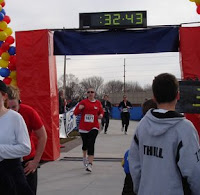 came in sight, I was actually disappointed. Yes, I wanted to finish, but at the same time I wanted to keep running. I got herded into a gated chute leading into the park and to the finish line. But before I could cross under that pretty balloon arch, I had to run uphill. Yes, an uphill finish. Kind of mean. But those long hours spent putzing around with the speed on the treadmill paid off and I was able to sprint up the hill to the finish line.

And the folks lining up along the finish were great too. And I saw some co-workers and heard my name and saw my mom waiting at the finish.

And then I was done. It was over.

Someone took away my GPS bracelet, I was given a piece of cheese in the shape of an airplane and it was time to become a spectator, cheering on the rest of the 5Kers and the folks running the half-marathon, including the cohorts.

As I passed under the balloon arch, the clock said I finished in 32 minutes and 43 seconds. On the race's Web site, it says my "chip" time was 32 minutes and 30 seconds. Either or, it was about the time I was expecting to finish in. I averaged a 10 minute, 30 second mile and I was the 385 finisher out of 710 participants in the 5K. Not too bad.

To all the folks who came out and supported us runners, thanks a bunch! And to all of us who ran, either the 5K or the half-marathon, congrats!
Posted by Badgergirl at 7:38 PM