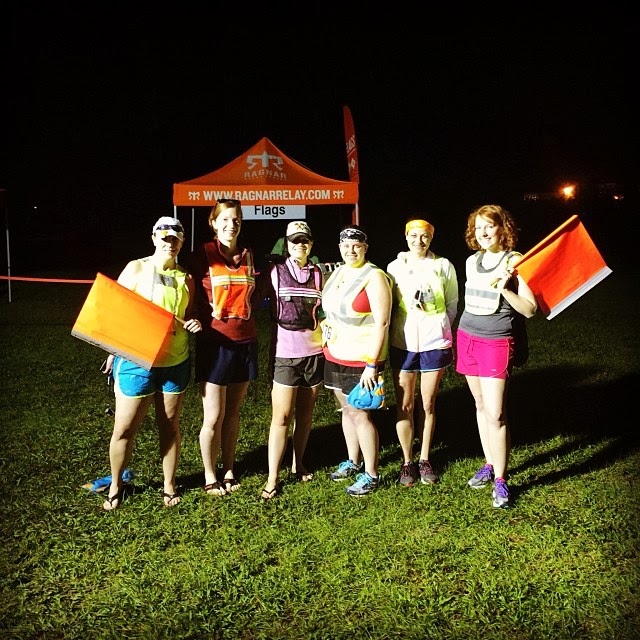 Van 1 of team #Whale, from left, me, Michelle, Mo, Erica, Jenny and Kelsey.

Our first runner started in the darkness at 6 a.m., and three hours later, after four runners finished their legs, it was my turn to run.

I had an easy 3.6 mile run to get my Ragnar Florida Keys adventure started. It was about 9 a.m. and it was a little overcast. It had been a pretty foggy morning, but by the time I ran, the fog had burned off and it was just cloudy. I was glad for the clouds since it was already heating up temperature wise. It was kind of humid and the thermometer was already flirting with 80 degrees. Just a bit different than the sub-zero temps I've been used to. 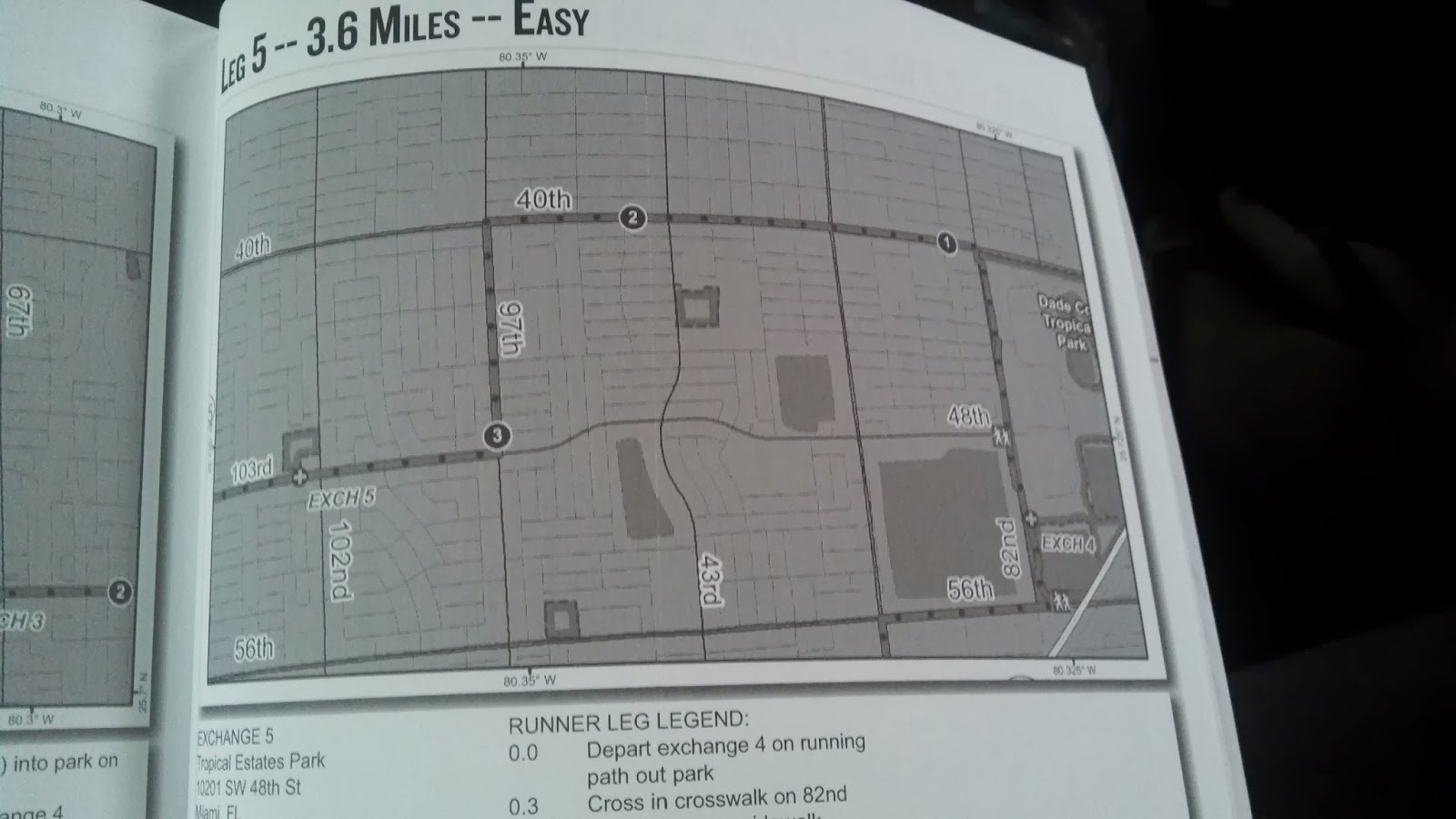 What I was supposed to run.

Runner No. 4 came in a bit quicker than I was expecting, so I grabbed the slap bracelet and was off, while trying to put my ear buds in my ear and turn on my iPod. It was a good excuse not to take off too quickly, I guess.

My run started along a trail in a park. I dodge some piles of bird poo and steered clear of some odd looking ducks and before I knew it, I was out on the streets of a neighborhood. The trip through the neighborhood was short lived though since when I made that first left hand turn I found myself running on a busy street in a commercial district.

Not the most scenic run.

Although I did see some road kill that I'll never see in Wisconsin: A dead iguana.

There wasn't much exciting about this run. Well, until I was on the final straightaway.

See I was just running along. There were runners around me. The sun came out and it started to get really hot. I'm not exactly sure what happened, but all of a sudden I noticed there were no runners around me. This was odd. And then I glanced at my Garmin and it told me I'd gone 3.7 miles. Ummm, I should be at the finish line and I didn't see any signs of a finish line.

Thankfully I had my phone with me and for some reason I had thought to snap a picture of the route I was supposed to be running. So I stopped and pulled out my phone. 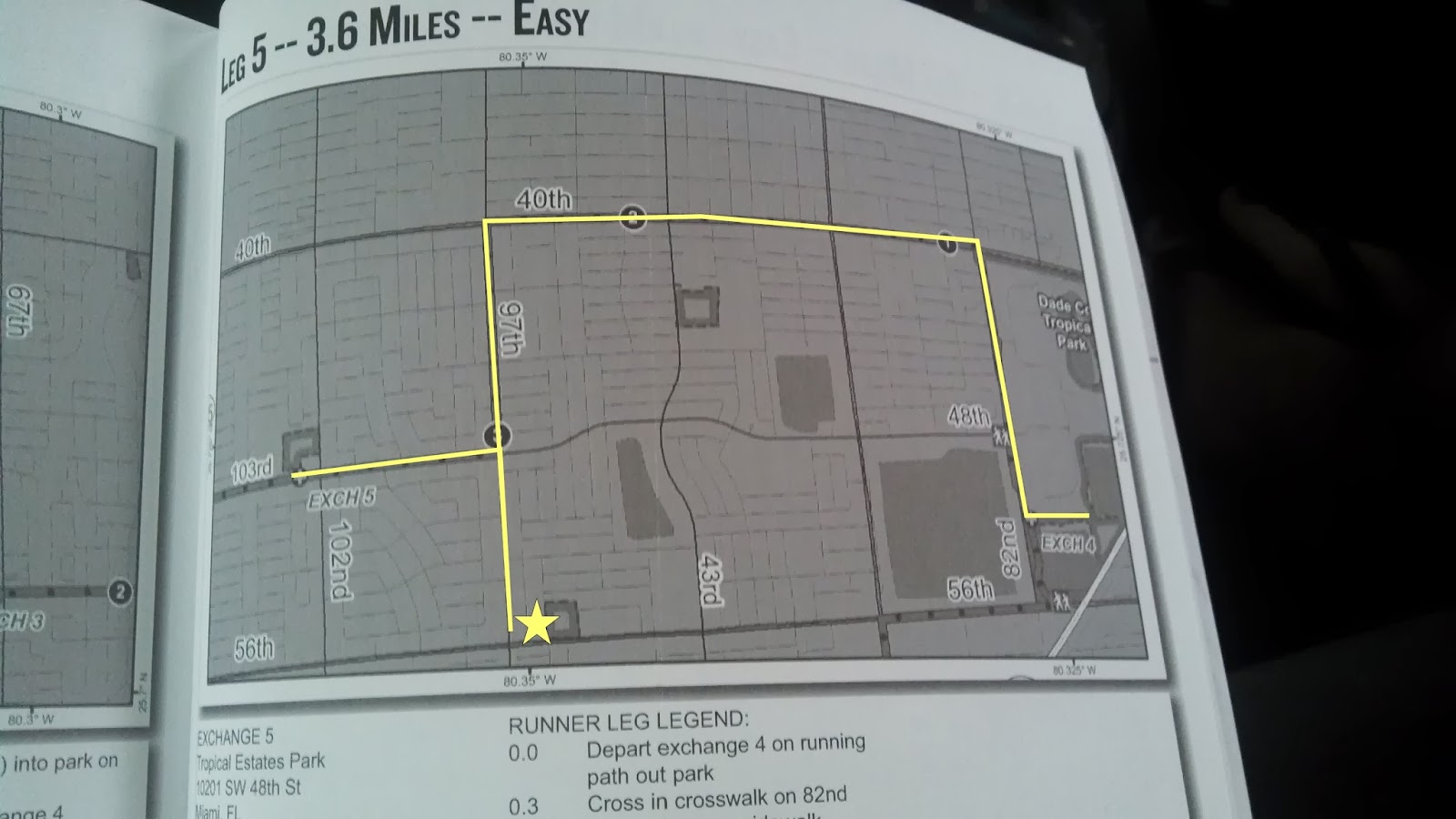 What I actually ran. I realized I missed a turn at the star.

Huh. Apparently I missed a turn. Like almost 10 blocks ago.

This kind of sucks, I thought to myself.

So I turned around. Walked a little bit. Ran a little bit. Prayed that the city of Miami magically skips numbers when it came to streets. Finally I got to the corner where I spied the sign that told me I should be turning. Yeah, I don't remember that being there before, but it probably was.

I was finally back on track. The exchange was in sight. I ran. Passed a girl and finally was able to hand off the slap bracelet to my teammate. 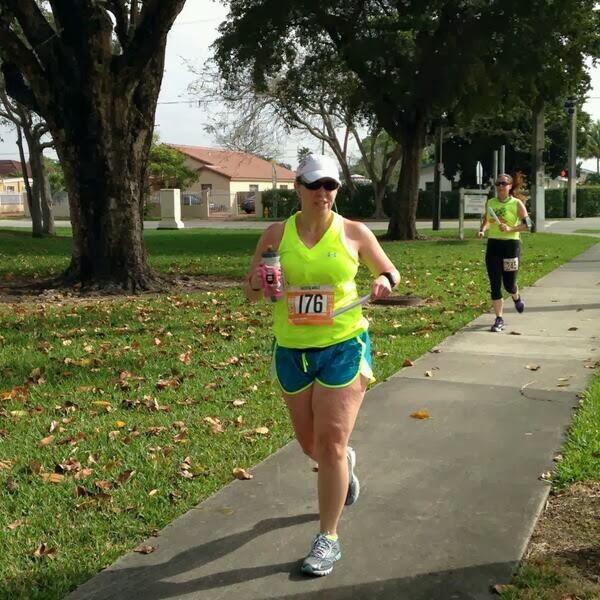 5 miles later I was done.

In the end my 3.6 mile leg turned into 5 miles. Yeah, that's just a bit of extra running.

But it was nearly time for Van 1 to go off duty and get some food.

Stay tuned.
Posted by Badgergirl at 8:00 AM