1. I don't want to jinx anything, but I think spring has finally decided to show up in Wisconsin. For the last three days the mercury has hit 40 degrees. And there's been sunshine! And lots of melting snow. So of course, I took advantage of it. Yesterday I got home from work, threw on some running pants and a long-sleeved shirt and headed out the door. It was only two miles - and while the run itself wasn't stellar - I LOVED being able to head outside and run without worrying about slipping, sliding or freezing. Now I don't like to put too much faith in weathermen, but look at what's forecast for the weekend: 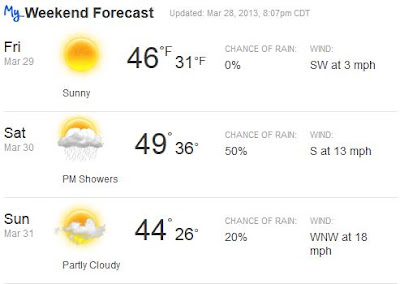 I can't wait to run in near 50 degrees for a long run Saturday!

2. It's been no secret this winter that my training for my upcoming half marathon(s) has been less than superb. Lots of weeks of skipped runs. Lots of long runs missed. Heck, if I was being totally honest with myself, there's no way I'm prepared to run a half marathon in Raleigh in a little over two weeks. The consistency, the preparation. It just hasn't been there. And I really think it's partly due to the never-ending winter that we've had. It's hard to psych yourself up for a long run knowing it'll be many miles on a treadmill to nowhere or so many laps on an indoor track you can't even keep count.

But I'm running. And even though I feel woefully unprepared for the RunRaleigh Half, I know it will be a good, albeit possibly painful, 13.1 mile journey. Because I'm excited to run with my BFF Jess. And we will have a good time. And if anything? It'll be a nice training run. Because from now until I toe the line at the start of the Cellcom Green Bay Half in May, it's on. No more excuses for missed runs.

3. In non-running news, I needed to revamp the reading goal for the year. When I set my goal of 45 books by the end of the year, I thought I was pushing it. After all, the last few years I either missed my 40 book goal or barely beat it. So I thought this was challenging.

I finished book No. 22 tonight.

I'm not sure why I've been able to read so many already this year. They aren't particularly short books and yes, they may not take a lot of thought to read, but they're still books that I have to read. It's not like they're picture books. Maybe it was the weather and the never-ending winter.

Whatever the reason, with already having finished 22 books in less than three months, I decided that I needed a bigger goal. So the new reading goal: 52 books. That's one book per week. According to GoodReads, I'm already 10 books ahead of schedule, so even if I do get bogged down and run into a week where I find it's impossible to read, I should still be OK. Look for the March reading recap in a few days to see how I've gotten to where I am.
Posted by Badgergirl at 9:21 PM

Bite your tongue, cupcake! I scraped ice from my car windows this morning! Lol

Is spring ever going to get here and STAY?!