I wasted no time running my first race in 2013.

I waited until 11 a.m. And considering I was asleep until 7:30ish, I'd say that's kind of impressive.

I headed down to Milwaukee early New Year's Day to meet up with some friends for a Rose Bowl viewing party. But we're all runners. So naturally we (Renee, Sara, Jodi and I) started out the day with a 5K run in South Milwaukee, the Polar Bear Dash 5K. 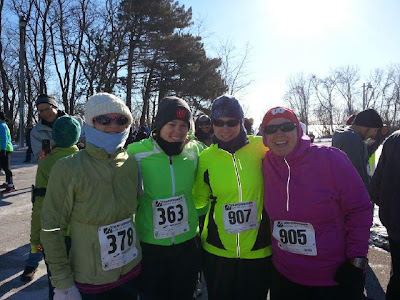 Bundled up and ready to run with Sara, Renee and Jodi.

It was held in Grant Park, along the shore of Lake Michigan. And it was cold. As in 9 degrees cold. Yup. It's been a while since I ran in temperatures that cold. And there was a bit of wind. But we bundled up and got ready to run.

The course was an out and back with an extra chunk added on at the end. The out and back ran through the park. Pretty. Scenic. And a few rolling hills. Right at Mile 2 I glanced over at a clearing near some woods and what do I see standing there?

A deer. A big one. With antlers.

What is it with me and deer lately? I swear they're following me!

But the deer just stood there. Looking as the runners ran by. 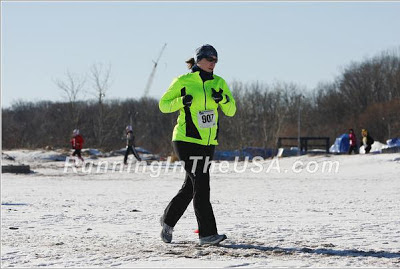 And I ran. Back to where the starting area was, but we weren't done yet. It was down hill towards a boat launch area. And a beach. Yes. I ran on a sandy beach strewn with rocks. Thought I was going to twist my ankle for sure. But I didn't.

We had to run towards the water where I had the option of running straight and right into the frigid waters of Lake Michigan  or taking a left and heading down the sandy beach to the finish. I opted to stay on land. 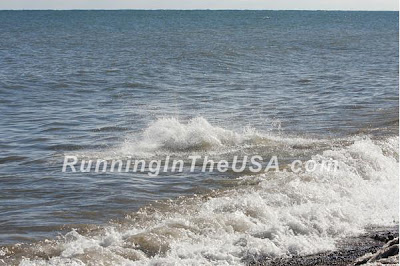 Yup. Not gonna run through that.

I finished up, grabbed some water and met up with the girls. Then it was time for Rose Bowl fun. Well, it would have been much more fun had the Badgers won, but it was still a great day in Milwaukee!
Posted by Badgergirl at 9:01 PM

Glad you came down for the race and game. It was good to see you.

Cool! Sounds like a crazy race. Glad you had fun, and I wish the badgers had pulled out a win too.