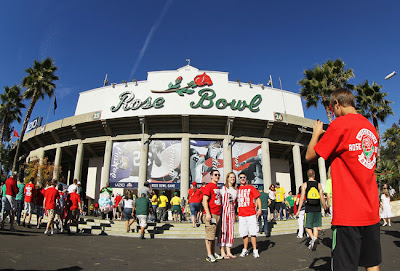 The day I've been waiting for is here!

What's that you say? I should be celebrating New Year's Day? Uh, no. Rose Bowls are MUCH more important.

Besides, for the third straight year, the Badgers will be playing in the Granddaddy of Them All. And I can't wait. Badgers. Stanford. Rose Bowl. Yay!

Like I have the last two years, I tried to make a convincing argument to my parents about why I should have headed west to Pasadena and sat in the stands for the game. I think my argument was especially convincing this year. Think about it.

The last two Rose Bowls Wisconsin lost. To those darn Horned Frogs from TCU in 2011 and the Oregon Ducks in 2012. Both years? I was sitting at home in Wisconsin. 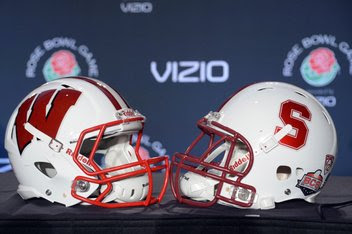 The last time Wisconsin was victorious in a Rose Bowl? That would be 2000. Where was I? I was sitting in the end zone in the stadium. Who was Wisconsin playing? Stanford. Who was roaming the sidelines as the head coach for the Badgers? Barry Alvarez.

What's that? Sounds familiar? That's because it is! Wisconsin's playing Stanford today. And because Bret Bielema bolted for a head coaching gig at Arkansas two days after the Badgers won the Big Ten Championship Game and the right to play in the Rose Bowl (Really? I mean, who does that?), Barry Alvarez will be roaming the sidelines in the head coaching role today.

I'm telling you. I should be there.

But I won't be. Instead I'm going to be heading down to Milwaukee, first to run a 5K and then take in the Rose Bowl goodness with Renee. I can't wait. Should be lots of fun!

On Wisconsin!
Posted by Badgergirl at 9:00 AM

I follow your blog and on twitter and I Just noticed we ran very close together in the Polar Bear Dash. Did you run in the lake? Not me, I'm a wuss. Happy New Year!

So I'm totally blaming you now for the blowout the Badgers got. You should have been there!

I'll take the blame, CJ. But I'm not sure I call a 6-point loss a blow out. Especially considering the Badgers were huge underdogs.

Hopefully I'll make it to the next Rose Bowl!

Sasha: That's crazy! What were you wearing? And no, I stayed far away from that frigid water! Did you go in? I thought it was a great race!