So I stepped out of my comfort zone tonight.

I went to a yoga class. 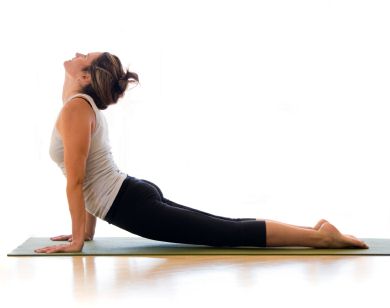 I'd never been to one before. I hear people who rave about it and the benefits it has. But I've always kind of thought of it as something that wasn't quite my style. I mean. I like to move. Sweat. Run. Bike. Pulling out a mat and holding poses? Didn't really sound like something I'd enjoy.

But a friend of mine asked me if I wanted to go to a class tonight at the YMCA and since one of my goals for the year is up the cross training and try new stuff, I said, sure. Why not.

I admit, it was weird when I got to the room the class was being held in and the lights were off. There were just some Christmas lights strung up around the room and people with those fake, electric candles sitting in front of their mats. I shrugged my shoulders, picked up a mat and block from the instructor, warned her I had no idea what I was doing and headed for the back row.

I don't really remember everything we did. I know there was some sun salutations, warriors, child's pose (hey, I rocked that one!) and pigeons. And some other moves that I don't know what they were called. Overall impressions? It seemed like it was geared towards the beginner. Kind of felt like choreographed stretching to me.

And I kind of liked it. I admit, I don't do enough stretching and this felt pretty good.

So I don't foresee myself becoming a yoga fanatic anytime soon, but I think I might head back to that class again next week and in following weeks. It might be a good supplement to my workouts and I'm sure once training kicks it up a notch, I'll be grateful for those choreographed stretching sessions.
Posted by Badgergirl at 10:06 PM

Email ThisBlogThis!Share to TwitterShare to FacebookShare to Pinterest
Labels: Yoga

I have a hard time getting myself started with Yoga. but once I do, it's so great and I always think,"I need to do this more often..."

I love the feeling after I get done with yoga, just sooo relaxed! It makes me take a step back from everyday life and just enjoy :)

Try it a few more times and you'll get hooked. I will rave about yoga and the benefits that are as much mental as physical. Don't forget, flexibility is easy speed!