Snowshoeing and being stalked 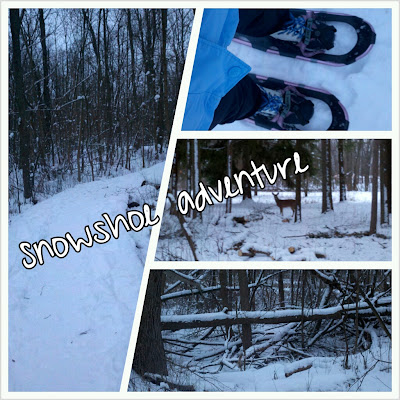 Let me tell you a story of the best Christmas present I got and wildlife. And how those two things are related.

Every year I get some Christmas/birthday cash from my Godmother. Money that I'm able to use to get exactly what I want for Christmas. This year I ended up heading over to Scheel's on the day after Christmas.

I had my eye on a pair of snowshoes. I actually started thinking about getting a pair last year, but since it was an abnormally warm Wisconsin winter with no snow, it didn't make sense. So I didn't.

But we've already had a foot of snow dumped on us just over a week ago and got another 6 or 7 inches on Friday. So there's white stuff on the ground. Which made my snowshoe purchase make sense. 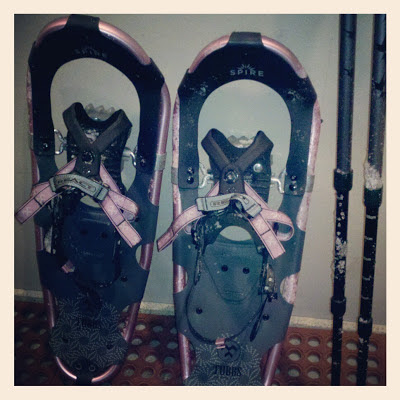 I got my snowshoes on Wednesday and took them on a short romp around my parents' backyard when I got home. But I took them for their first real outing on Thursday afternoon.

After doing some errands in the afternoon, I headed over to a local nature preserve that's near my parents' house. It's got about 3 miles of trails of varying length. I got there, parked, strapped on my shiny new snowshoes, hit play on the iPod and headed off on the one-mile green trail. 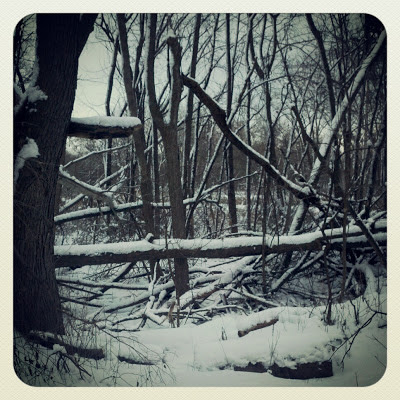 It was a loop through the woods and along the outer edge of the preserve. Very pretty. Lots of snow. Some of the trail was kind of packed down, which wasn't very fun, but I did manage to find some untouched snow that I could tromp through. 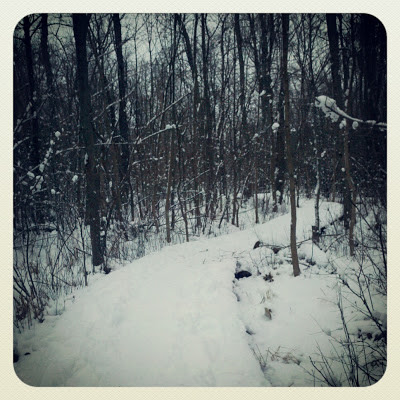 So I'm nearing the end of the trail. I could see the roof of the building through the trees. I come around a corner and there in the clearing was a deer. A nice sized deer. Probably a doe since there were no antlers. He was just standing there in the clearing, chomping on some tree limbs or something. Looking at me.

He was about 20 feet away and at first I thought this was cool. I mean, a deer. So close. Normally they see a human, get spooked and bolt. Not this guy. And then I realize he's not alone. Nope. He's got 4 of his buddies hanging out with him. Oh. This just got a bit cooler.

I snapped a few pictures and I was ready to go. I kept on going, round a corner and then I was back by the deer. Still standing there. Still chomping. Still looking at me. Only now I was closer to him. He was like 15 feet away. Chomping. Looking at me. Really closer to the trail that I was on. 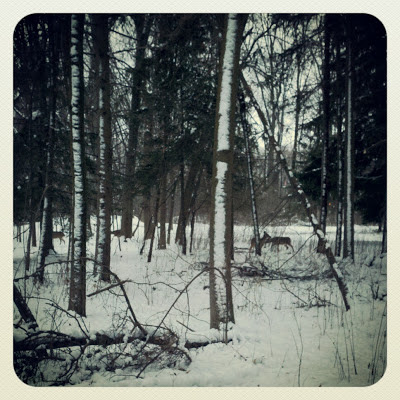 I yelled. Nope. I stomped my snowshoes. Nothing. I cranked up the volume on my cell phone and played it, hoping he's bounce off through the woods. Nope. I flashed my headlamp (it was starting to get dusky). Nada.

In fact, instead of bouncing away. This deer? He took a bite. Looked at me. AND MOVED CLOSER TO ME! Chomp, chomp, chomp.

I started thinking. What the heck? Aren't deer scared of people? Why aren't they running off through the woods? Didn't they see Bambi?

Instead I've got five deer slowly coming closer to me. And just staring at me as they chomped on their tree sticks.

Oh dear (no pun intended). Do deer attack? Or are these five deer plotting to attack me?

I turned around. Went back the way I came and headed off on another trail that would take me back to the parking lot. When I saw a SIXTH deer bounding through the woods towards his friends. Yup. They're plotting. There's a little gang of deer at this nature preserve out to get me.

I got out of the woods and headed down another trail that was through a prairie - at least then the deer would be in the open, not hidden in the woods plotting. Unfortunately, when I was done and I came out of the last little bit of wooded area by the park's building, there they were.

All six deer. Standing there. Waiting for me. Then they ran off and I left. I survived an eminent deer attack. 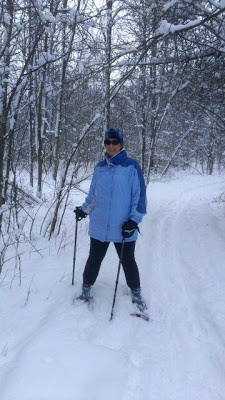 Now after telling my story, I've been told these are probably just very non-spookable deer. Very used to people. Heck, my Dad said they were probably waiting for a treat from me - which is possible. I mean, how tasty can tree limbs be?

Well, those thoughts were solidified today when I went back. And as I was snowshoeing through the woods I cam upon my deer friends again. This time I was so close I could have patted it on its nose. All four of them. But of course, all they did was just stare at me. And chomp on whatever they were eating.
Posted by Badgergirl at 9:54 PM

that's insane! we see deer all the time down here, and they don't all get spooked as quickly as I would like. But they've never really bothered me.