A few weeks ago I decided to do the Race for the Light 5K just for fun. It's a local race, one that I've never run during the six years I've lived in Oshkosh. I've either been out of town of the weather has just been absolutely miserable. I mean, it's the first weekend in December. In Wisconsin. It can be freezing cold.

But it was anything but bone-chilling cold last  Saturday. In fact, it was like in the 40s when the race started at 4:30. There was a bit of a drizzle, but nothing bad.

Like I mentioned, going into this race I knew I just wanted to have fun. It's a 5K that's run through one of the parks in Oshkosh and the park is decked out in a TON of Christmas lights. So it's a very scenic race. I was running this with my good friend Peggy and I picked up pair of headbands - complete with Rudolph heads that featured blinking red noses - and blinky Christmas light necklaces. 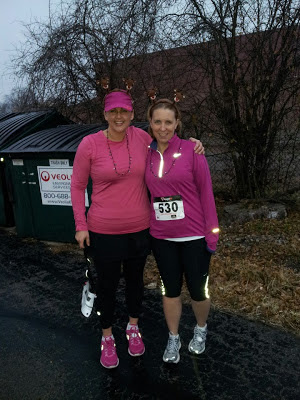 Oh yes, those are dumpsters you spy in the background. Classy. :)

The 5K was actually the second part of our very fitness filled Saturday. We started the morning out at the Fitness Frenzy at the YMCA. It was two hours broken down into four 30-minute sessions of samplings of classes that are offered. And it was tough. Our class sampling? Classes by the name of Butt and Legs. Core. Med Ball Blast and Strength and Resistance. And a common theme? Lots of squats, lunges, mountain climbers, planks. Yeah, it kicked my butt.

And afterwards? Peggy said we'd be off to run that sub-30 minute 5K. I hoped she was kidding, because my legs were trashed.

A few hours after finishing up the frenzy, we headed to the park and the race started.

The first mile went well, sub 10. But then my legs started to rebel a bit and I could feel the pace slowing down. By this point, we were in the park and I was ok with slowing my pace just to take in the lights. We slowed, looked at the lights and talked about plans for next year.

And 34 minutes and some second later we finished the 3.25 mile course. Yes, it was intentionally long. Something about marking an anniversary of the event (10 years I think). A good way to end the year.

Then it was off for some beer, some pizza and to watch the Badgers.
Posted by Badgergirl at 8:04 PM

In order to enhance my physical capacities when running I am taking Military Grade Supplements. What I really like about them is that they are natural and provide sustainable results. Pre-workout formulas effectively enhance and maintain my endurance and strength. My distances are increasing and my shape improving steadily.