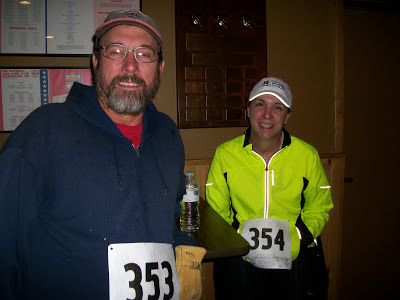 Hanging with Dad before the race.

Two weeks after this race, I still chuckle a little bit that the race theme was waddling ducks and the T-shirt featured ducks in swim trunks.

This race was wet. But it could have been much worse. It was the weekend where all it did was rain. And not just a light rain. More like a constant downpour. I think we ended up getting almost 5 inches of rain.

But lucky for the runners who lined up for the St. Joe’s 5K on Oct. 13, the rain took a brief break. It was still sprinkling, but nothing like what the walkers had to contend with a half hour after I crossed the finish line.

The race is a Portsmouth start, so no mass start, and the course is an out-and-back. A short jaunt through the city streets, across the Trestle Trail (which is an old railroad bridge that spans the river) and back.

The first half of the race? I felt good. Keeping a nice steady pace. I passed my Dad (who started about 2:30 in front of me) about 3 blocks before the bridge and told him I’d see him on the way back. I hit the turn around and headed back across the bridge. When I took that first step on the bridge? BAM! The wind hit me. Not a light wind. A fairly stiff wind. And there was no escaping it since I was running on a bridge across a river. And don’t forget wet since it was still sprinkling.

I threw in two short walk breaks during the second half of the race (battling the wind was hard) and finished in 31 minutes and a few seconds. Decent given my lack of running lately. 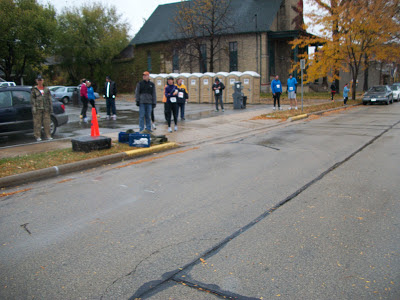 This was supposed to be me finishing, but somehow I ran right out of the frame before Mom could snap the photo.

Thankfully the rain stayed away for the Saturday 5K. The rest of the weekend? Not so much. My planned 13 miles with Peggy never happened as it POURED all day Sunday, never letting up. And I don’t run double digit miles in a downpour. And since I can’t handle that many miles on the treadmill? The weekend long run never happened. Oops.
Posted by Badgergirl at 7:37 PM

Sweet and Savory by Sarah said...

I did St. Joe's last year. The wind on the bridge is imminent. It killed me but it happened on the way out,not in last year. Good job finishing strong!