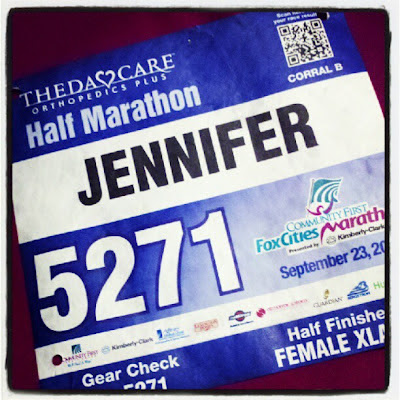 Or what will also be known as, "This is going to hurt. Deal with it."

I went into race weekend feeling pretty calm. I'm not sure when it started happening, but somewhere along the way, I've realized I don't really get nervous for half marathons anymore. Maybe it's because I've run the race distance so many times. Or I'm not putting a ton of pressure on myself for results. I don't know. But for like the last year, I haven't been getting super nervous. I'll take it.

So Saturday I watched the Badger game and then headed over to Fox Valley Tech to the race expo. I met up with Peggy, my running partner in crime who opted not to run the race this year, and we browsed for a bit. I picked up some BioFreeze, she picked up some socks and we were done. We headed over to Starbucks for some caffeine, where we proceeded to hatch a plan for next year and beyond, chat and talk race strategy, because even though she wasn't running, she gave me good advice. And she wanted to let me in on her spectating plan for the next day.

Race day dawned bright dark and early. I got up, put on my race day outfit and headed out the door at 5:45. While my mom was driving over to my brother's house to pick up my sister-in-law, I did a quick race morning social media check - Twitter and Facebook, very important pre-race tasks. While I was at it, I posted this:

See even though I had taped my IT band that morning, I knew it was still going to hurt. But I didn't want to let the pain win the mental battle. I wanted to gut it out. The day before Peggy gave me advice: Run the first part with your head, the middle with your personality and the final third with your heart. And then there was Jeff's advice from last year still rolling around my head: Run your own race and then throw the hammer down in the final miles.

This was my race. Not my IT band's race. I wasn't going to let  it decide what kind of race I was going to have.

We got to the race site, I made a quick stop in the port-a-potty while the lines were still short and tried to find my Fleet Feet team, but was unsuccessful. Soon it was go time.

Right before the gun went off, one of the assistant coaches from the Fleet Feet group, Sue, found me. She asked me if she could run with me. I said I didn't care, but I wasn't going to be talking. See here's the thing. I like running with other people.

When it comes to racing, I actually prefer to be on my own. I like to zone out to my iPod and run my own race. I'm actually pretty good at pacing  myself to hit the goals I set for myself.

But she said she understood I wasn't going to be chatty, so I shrugged my shoulders and said OK. 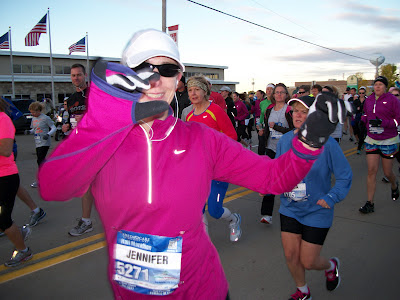 Years of practice is paying off. I like this one my Mom snapped at the start.

The gun sounded and we were off. I saw my Mom just after the starting line and I settled in at a nice easy pace. Sue tried to chat a bit, but I kept my answers short and then plugged myself back into  my iPod. Remember, I was running my own race.

Shortly before Mile 1 I started to scan the crowds lining the street, looking for Peggy and her daughter. All of a sudden I saw a bright neon pink sign with my name! I cut across the road and gave them high fives and I was off. 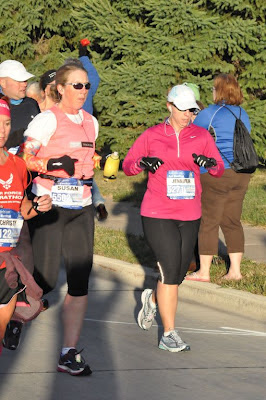 Coach Eddie was out on the course snapping pictures. Never saw him here.

The first four miles went really well. I was feeling good, keeping a decent pace and carrying out my plan of walking the water stations. Right before Mile 4.5 I saw my aunt and I handed her my gloves and kept running, through the roundabout and past my non-family cheering section of Peggy, her daughter and Rita, another runner I know.

I was feeling good. Strong. The IT band wasn't cranky. I turned the corner onto Plank Road and kept running. Even with the light winds that I was running into, I still felt good.

Miles 5-7 were uneventful. Pretty much a 2-mile straight away. I saw my cheering crew around Mile 7 again. It was great seeing someone so often. It gave me a little bit of a boost of energy and I could feel myself picking up the speed right after I spotted them and for a bit of time afterwards.


Right around Mile 7.5 I had a bit of a problem. Seems the wonderful Menasha Police Officer thought it was completely acceptable to see a pack of 6 runners approaching and still wave the car through the intersection even though said runners are like 5 feet from the car. That's what he did though. Which meant we either had to stop suddenly or alter or path really quickly. I yelled at the cop. Would have said something much worse and given him a one-fingered salute, but then decided against it. After all, he was a police officer.

I saw my Mom and my niece and nephews at Mile 8 and kept on running. I didn't hear him, but apparently the youngest rugrat (he's 6), yelled, "Go Aunt Jenny! You stink!" His reasoning was that if he yelled something mean, I would get mad and run faster. OK. 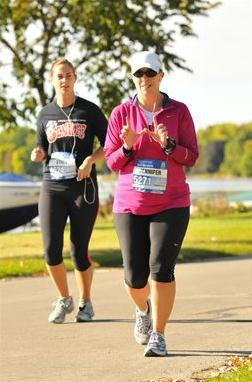 Swiped from the official race photographer. Note: It's hard to run, smile and make a W with your fingers.

I made it to the aid station at Jefferson Park, which is right around Mile 9. I walked a little bit further through the aid station than I had been at previous ones. This was really the only time I walked much longer than 10 seconds or so. The legs were starting to get a bit tired at this point, but that makes sense. I had a quick conversation with my IT band, reminded it to deal with anything that would be coming over the next four miles. I exited the park and started to run again. 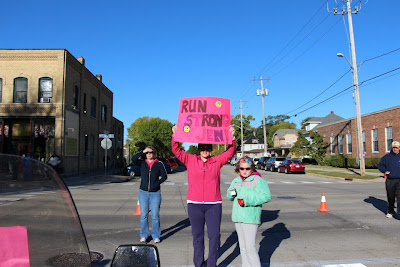 My cheering crew right at Mile 10!

The next mile was a long straight away until you turned the corner before the second bridge on the course. At the corner I spotted my bright pink sign and Peggy. Up until this point, I hadn't really been looking at my Garmin. But as I approached that corner I glanced down. 10 miles. 1:45.

I did some quick math in my head and also realized that I was running the same pace as I did at Fox Cities last year. Whoa. Could a PR be in my sights?

As I passed Peggy I told her this. Well as much as I could in 2.5 seconds. She told me I looked great and was kicking ass and to keep running.

So I did. Up and over the Racine Street bridge, through the next aid station - which was decked out in a Badger theme complete with "Jump Around" blasting from the boom box - and on my way towards Mile 11 where I saw my crew again. 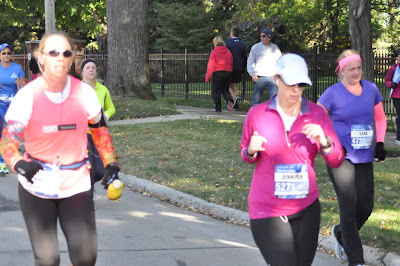 Another one from Coach Eddie. Just under 1.5 miles to go.

Even knowing a PR was in my sights, I didn't constantly check the Garmin. I just focused on putting one foot in front of the other. Because I knew with every step that got me closer to the finish line. It worked. Pretty soon I was making the turn on to the last big straight away before I made a final turn for the loop around the park past the lighthouse and to the finish line

When I could see the finish line arch in the distance, with about 0.2 miles to go, I let myself look down at my Garmin. It would be so close to a PR. But perhaps more importantly, so much faster than I was anticipating I would be able to finish in. I admit, I teared up a little bit. I kicked into my finish line sprint and crossed the line. 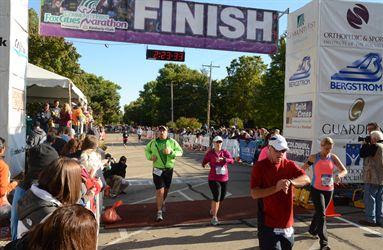 Holy cow! Totally not expecting that kind of result! But I guess that just goes to show you what can be accomplished when you put your mind to it. Although I'm not going to lie, there's a tiny piece of me that wonders what I could have done had I not had some setbacks in training this summer due to that pesky IT band.

I went through the finish chute, got my Mylar blanket (which felt oh so good on this chilly day!) and medal. The first people I see? Peggy and her daughter. My cheering crew that kept me going through this 13.1 mile journey. Seriously. I can't even start to form words that express how grateful I am for their support. 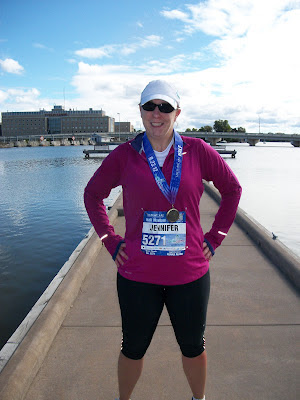 I looked for my Mom, didn't see her. While I went to the med tent to get some ice for my IT band, Peggy called my Mom. Turns out I ran too fast for her and the Rugrats to get to the finish line in time to see me cross.

For those keeping track at home, that's 10 minutes faster than my fastest half this year (which was at the Oshkosh Half way back in April) and just 46 seconds slower than my PR. And that's after a summer long struggle with an IT band injury. 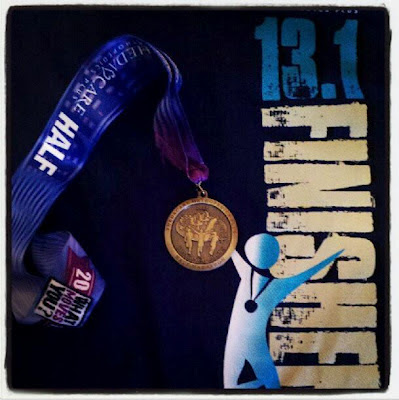 I'd say the IT band is a pretty good listener though. It hurt. But it just shut up and dealt with it. At least until after the race was run. :)

Posted by Badgergirl at 9:00 AM

I need to NOT run all the same races so I can come cheer instead. So.fun. And so proud to have a friend that kicks ass. Congrats again on an awesome race!

Congrats! I'm so glad you had a good race. I'm seriously considering this one for my calendar next year.

Great race report Jen! Congrats on gutting it out and reaping the benefits. Wish I could have been there to cheer you on. I think you might have eeked out the remaining 46 seconds. Way to go!

This year just watching the Badger game can become the most disapointing part of the weekend. geez.

Great job! That's a whole lot of ouch going on out there. it's nice to have 6 yr olds yelling mean things at you.

Congrats on the great race! Glad this one went well for you. Strongly considering this race for next year.

Great run and report. Congratulations. Sooner or later we will meet face to face at one of these events.

Congratulations! You did awesome! Sorry it took me so long to read the official race report. :)